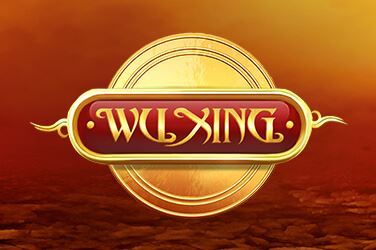 When the majority of slots that celebrate China’s culture tend to go for the glory days of Imperial power, or sometimes for a modern or futuristic look at Shanghai, but Wu Xing takes a gentler and more spiritual look at ancient Chinese philosophy.

Wu Xing refers to the five elements of Chi from traditional Chinese spirituality, an aesthetic it achieves with uncharacteristic restraint for a slot based on Chinese culture, considering the usual colourful and bombastic flair that it produces. But will you balance your chi or find yourself doomed to chaos? Let’s take a look in our Wu Xing slot game review.

We’re used to Chinese slots that celebrate their love of luxury, colour and gold, with plenty of grand Imperial palaces and symbols dripping with precious metals and gems. You don’t get any of that in the Wu Xing slot game, which makes for a nice change of pace, and instead, the reels are backed by a tranquil orange sunset over a desert while they themselves are written on a scroll in Chinese calligraphy. The five elements that make up Chi are earth, fire, water, wood and metal, and these are all represented on the different reels, with each reel getting an element.

The high-value symbols in Wu Xing slot game are also the elements represented as coloured orbs, while the low-value symbols are Chinese characters representing the numbers one to five. Relaxing Chinese music plays in the background, while electricity crackles lazily through the reels when you make combos, contributing to the relaxing air.

While the visuals might be a surprise, the mechanics Wu Xing certainly won’t be. The playing area is the standard three rows and five reels, with 25 pay lines to play with and a maximum bet of £/$/€100. Considering that the maximum payout in the main game is a healthy 400x your wager, this game has the potential to be extremely rewarding if you choose to bet high. All of the five high symbols pay the same, so while there are no massive standouts there are no duds either, making for a solid RTP of 95.12%

On top of those good payouts, the developers were kind enough to add in a couple of excellent bonuses as well. The first is entered by landing the Yin/Yang scatter, which opens up one wheel first that you spin to determine the value of the scatters that will appear during your five free spins.

The third reel in Wu Xing slot game is lucky, so landing scatters on this one during the first wheel will make the scatters extra valuable and may even award you more free spins! A second bonus feature actually occurs during the main game, and it is simply a random helping hand that transforms non-matching reels into reels full of matching symbols to help you generate wins.

Wu Xing was a nice surprise at first, being a Chinese slot that has a very original design and theme, but the surprises kept on coming when we discovered the great payouts and the fun bonuses. If you like Chinese themed slots, but you just want to have a nice relaxing time playing slots, this is a great option for you.