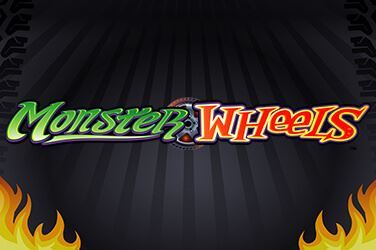 There aren’t many people who have gone through a phase of liking big, noisy cars at some point in their lives, and Monster Wheels really scratches that itch by being all about loud, roaring racing cars. It’s not the size that’s monstrous in these rowdy racers, but the drivers themselves, who are literally storybook monsters including devils and vampires.

So will you come away from this game with monster prizes, or is this game just scary? Let’s take a look in our Monster Wheels slot game review.

This game aims to be fast and furious, and it’s got the design to match because it’s all very much themed around the hot rod cars driven by our ghoulish heroes. The background to the reels is a road marked by burnt rubber, while the reels themselves are all shiny chrome and pipes. Rather disappointingly the lower value symbols are represented by the standard 9 – A icons, decorated in the standard style used by Microgaming slots, while the higher value symbols are the monsters in their hotrod cars.

There’s nothing subtle about this Monster Wheels slot, with electric guitar music wailing in the background as your fortunes rise and fall, while flames flash across the screen to celebrate winning combinations alongside the screech of tyres and the roar of engines.

The first thing to talk about Monster Wheels is the 128 and 288 ways to win, which effectively means a decision between winning bigger or more often. This also changes the way that this slot looks, switching between a hash and fan-shaped set of reels for the two different modes. Other than the visuals and the different ways of winning the two games play exactly the same, and in fact, you can switch the modes as you’re playing, so it’s all down to personal preference. The betting limit is low, hovering at £/$/€15, so you’ll need to be patient to generate the big wins, but an RTP of 96.04% ensures you won’t struggle to make cash in this game.

While the main game is full of flash and fury, it’s not exactly packed with features over and above the visuals, so it’s a good thing that Monster Wheels comes with some great bonus features to help fill your pockets. Land three petrol can symbols and you’ll be given the choice between various modes, which simply allow you to choose between more spins and higher multipliers. Once again, the decision comes down to personal preference, and choosing between 12 spins and a six times multiplier isn’t an easy one to make. With a top prize of 7000x your stake possible, choose wisely and you could end up rich!

The Monster Wheels slot game is an exciting thrill ride, backed up by the potential for huge wins and free spins galore. On top of this, the many options you’re given to change the way you play give you huge amounts of control over how you want to go about going after that prize. If Mario Kart meets The Munsters sounds like your cup of tea, you’ll be in heaven!