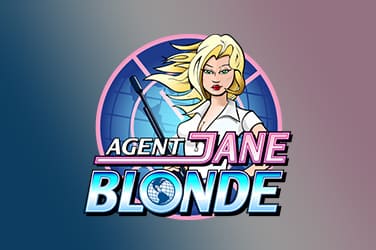 There’s a saying that blondes have more fun, and that certainly seems to be the case in this game, which features a special agent whose hair colour is right there in the name!

Agent Jane Blonde is a super spy whose adventures would put 007 to shame, and even though their names sound suspiciously familiar, she’s her own woman on the end of excitement, danger and glamorous escapades all over the world. But does the life of a spy pay well as well as provide thrills and adventure? Let’s find out in our Agent Jane Blonde review.

We’ll just come out and say first of all that the Agent Jane Blonde slot game isn’t the most forward-looking slot you’ve ever played. There’s a lot of pink about the place, and Jane doesn’t seem to wear very much, but as a bit of tongue in cheek fun in the style of the Carry On films, it certainly looks really good. All the symbols are unique and depict Jane, her friends and enemies in a variety of dangerous-looking missions as well as her trademark martini, her lipstick, her gadgets and her snub-nosed Derringer. Sadly there’s no soundtrack and the animations are limited, but there’s plenty of charm about her adventures to enjoy anyway.

A bit like the spy movies that this game is based on there’s not a huge amount of depth and what you see is what you get in this game, which makes it nice and simple to play even if there aren’t a shed load of features. There are three rows and five reels with nine pay lines to play on, while the maximum bet is fairly high at £/€/$90 per spin, which is a pretty good figure when the top paying symbols grant wins of up to 750x your wager when you land five. These symbols include the images of Jane and her accomplices on various missions on the water, in the snow and in the air, but the best payer of all is the wild symbol of Jane’s face, which is worth an amazing 10,000x your stake for five. It’s no wonder the RTP is an impressive 97%

There is just one bonus feature in this game, but it’s a good one, allowing you to land 15 free spins by getting five of the game’s logo scatters in a row. All of these free spins come with a 3x multiplier attack, so you’ll be able to create some really epic wins, and you can even re-trigger this bonus from within your free spins for even more spins and multipliers. If you end up landing yourself a nice total you can even go for broke and risk it all on the chance to double or even quadruple your wins by guessing the colour and suit of the next card to be picked. It’s a risk, but your reward could be huge!

Thanks to its fun and inventive theme and its reliable and lucrative game mechanics, Agent Jane Blonde is a real find and deservedly considered a classic by many slot game players. While it may not be packed with features, it does the basics very well, and with its high paying bonus game factored in, there are some great prizes to be won on top!

You don’t need to be a secret agent to find great slots. You could try Vinyl Countdown, Supe it Up, Reel Strike, Ariana.