Home » Microgaming » Supe it Up

Supe It Up Game Review 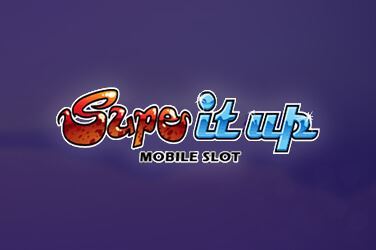 Car modification is big business, with men and women up and down the country filling their garages with equipment and spending their spare time and money creating the car of their dreams to race and show off to their friends. Whether you’re into car modding or not, it’s hard not to get swept up in the excitement of Supe It Up, where fast cars and big wins are the order of the day.

So will you lead the pack, or will you get a flat tyre? Let’s take a look in our Supe It Up Review

The Supe It Up slot game really goes for the bright colours, flamboyance and excitement of the car modding scene, making use of cartoonish graphics and vibrant images to draw in the eye. Unfortunately, the result looks a bit dated and could easily have been created ten or fifteen years ago. It’s not backed up by much in the way of interesting soundtracks or animations, with a generic beat going on in the background and a variety of car noises that play when wins are generated. The low-value symbols are the generic 9 – A painted the same colours as the cars, while the higher value symbols are a combination of colourful modified cars and modding equipment like speakers.

So the game isn’t really up to much in terms of the visuals, but what about the gameplay? Supe It Up tries to be a faithful recreation of a physical slot machine, so all the buttons and icons you’d expect in real life are there on the screen. There are 25 paylines and betting ranges between £/€/$0.25 and £/€/$50.00, which isn’t a massive spread, but there are plenty of opportunities to place it how you like across the reels. The RTP sits slightly below average at 95%, so you’ll need a little help from the bonuses to make a fortune.

The bonus rounds are where this game really starts to lift off, and while they’re not complicated bonuses by any stretch, they’re generous at least. The wild is the word Wild picked out in a racy red script, which races off when you win using it and can be used to complete other combinations. It also doubles the win of any combo it’s part of, which is a nice touch, though the best way to use this symbol is to get five in a row and to generate a win of 10,000x your stake! A second special symbol is the car speaker scatter, which can generate between 20 and 30 free spins depending on whether you land three, four or five of them. Even better, they’re all subject to a whopping 6x multiplier to help you rake in the cash.

Supe It Up isn’t the prettiest or most modern game on the market, but it seems to like it that way. The layout and controls are deliberately reminiscent of old-style slot machines, but so are the generous payouts! If you’re a fan of modded cars, or you can bear them enough to play for the cash, this game is worth a shot.