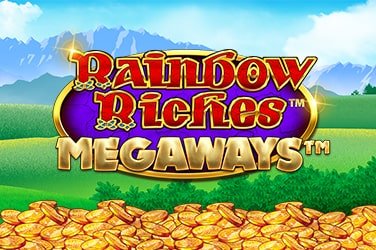 Based on the classic and well-loved Rainbow Riches casino game, its predecessor will make fans of the original feel right at home with many similar features that made it such a classic and even more chances to win. Rainbow Riches Megaways is perfect for those who enjoyed the original, the new version from Scientific Games features 6 reels and up to 7 rows with an astonishing 324 – 117,649 ways to win a prize. On the 1st and 6th reels only, you can land between 2 and 7 symbols and between 2 and 6 on the rest. Not to mention the well-known Barcrest leprechaun, an admired figure throughout the saga.

As it was so popular with the original game the bright uplifting graphics are all there. The rainbow and its pot of gold coins at the end will make any player feel instantly nostalgic. The reels are plated with gold on all sides as well as the score counter to the bottom of the screen with a red backdrop, and the background a lush green field with trees in the distance. The only difference to the initial look of the game is the brand-new horizontal reel that can be seen on top of the original set.

The symbols on the reel at Rainbow Riches Megaways show blue, green, purple, orange and clear gemstones as well as A, K, Q, J and 10 Royals. The clear gemstone is the most rewarding with a combination of between 2 and 6 paying out between 2 and 50 times your stake. The Wild symbol is that of a lucky horseshoe which can replace any symbols apart from the bonus +1, +2, +3 and the super gem symbols.

Rainbow Riches Megaways works with a cascading reel feature meaning any combination of symbols on the reels are removed and replaced with new, randomly selected symbols from above. These are then possibly put into new combinations which are removed and replaced continuously until there are no combinations on the reel. This means the chances of winning again and again never end, with some luck players could hit win after win off a single spin.

Being a medium to high volatility game, Rainbow Riches Megaways is ideal for players that enjoy chasing substantial wins and with an RTP (Return to player) of 96% the wins will be worth the risk. Fitting for Megaways slots Rainbow Riches does not work on a progressive jackpot, but the potential for huge payouts is still there if you’re willing to chase it. The game offers amazing potential reaching over 10,000x the given stake that varies which itself can reach $/€/£20 if the game is played right and with a little bit of luck.

Rainbow Riches Megaways you’ll be happy to hear is compatible across mobile and tablet devices, so you are able to play it on the move anytime. With the Casino 77 mobile site, you can take Rainbow Riches with you wherever you go and hope to reach the pot of gold even when travelling yourself.

In an attempt to do something different from the other Megaways games you’ll find an array of bonus buy options, a free spin and a modifier feature in Rainbow riches. The Super Gem feature is triggered in the base game allowing for a free spin if the player is lucky enough to see a Super Gem symbol land in the new horizontal reel. This feature allows a fairly low stake game to offer some big wins. You also have the ability to trigger 12 free spins if you manage to hit 4 scatters anywhere in the main reels, as long as it’s in a single spin. If you land on the triggering spin again, you will get another 5 spins.

Whilst these features are good, they definitely aren’t the main attraction. If you manage to bag the unlimited multiplier, it will increase by x1 following each win with no limit as to how high it can go. You might even see the Super Gem symbol again on the horizontal reel, giving you even more chances to win.

Players don’t even have to wait for a free spins round to be triggered, they can use the Buy Pass feature for instant access if they’re feeling impatient. However, be warned that it will cost them a single bet of 100x whatever the standard stake is. If a player isn’t prepared to increase these stakes, they can instead use the Take a Chance feature, staked from 24x to 75x which gradually increase their chances of landing on the winning parts.

It’s also easy to lower the cost of the free spins bonus using the Bonus Bank feature. This gives the user three options that add another dimension to the game. Firstly ‘Bank off wins’ will add all wins to the players balance, next ‘Bank all wins’ then all wins will be added to the bonus bank and if they ‘Bank small wins’ then all wins 3x their stake or less will go to the bonus bank.

With so many brilliant features creating different parts to the game and all the different methods of getting wins, it would be impossible for Rainbow Riches Megaways to get a negative verdict from us. All of the work into making such a creative, enjoyable game with brilliant play features and rewards makes for a genuinely great gaming experience.