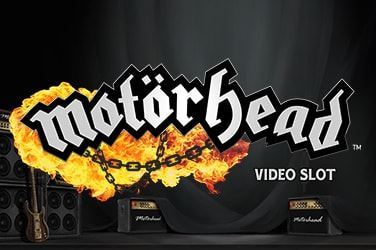 First released in 2016, Motorhead is an online slot developed by seasoned provider NetEnt and is themed around the popular metal band of the same name. But with its exciting special features and beautifully rendered graphics, Motorhead should appeal to more players than just classic rock fans.

The slot is designed with muted colours and monotones, in theme with Motorhead’s black-and-white aesthetic. Players spin the reels against a soundtrack of Motorhead songs, with Lemmy’s distinctive vocals adding commentary when players score wins on the reels.

The Motorhead slot combines images from the band with classic slot machine symbols to create a gameplay experience which will appeal to a wide range of players. The highest paying symbol on the reels is Lemmy himself, who pays out between 1x and 150x the bet for between two and five symbols on a line. Other classic slot symbols like stars, bells, cherries, and 7s appear on the reels, with these paying out between 12x and 50x for five on a payline.

There are plenty of special features on offer in Motorhead to keep players spinning. During standard gameplay, there will always be a mystery reel in play unless the Bomber feature is active. This mystery reel resolves into stacked symbols once other reels have fallen into place.

The Bomber feature is sometimes activated randomly before a spin in the main game. A bomb will drop onto the reels and generate a cluster of mystery symbols, all of which will resolve after the main reels have been spun.

Players can also land three scatter symbols anywhere on the reels to trigger 10 free spins, during which mystery reels will be made up of both mystery symbols and extra wilds.

Motorhead plays well on all kinds of devices including laptop, desktop, smartphones, and tablets. It’s easy to play on the go on handheld devices running both Android and iOS, and it loads quickly and runs smoothly even on mobile data connections.

With a return to player of 96.98%, Motorhead offers players good chances of winning compared to many online slots. This means that, on average, players who spend £100 playing this slot can expect to win back around £96.98; this is a little higher than the average, around 96%. It’s also a low volatility slot, which means wins are small but come infrequently; this will likely appeal to players who don’t like to play high-risk games.

Motorhead is a brilliant online slot that will appeal to players who enjoy variety in their games. With three distinct special features, two of which affect regular gameplay, plenty is going on in Motorhead. Of course, slots fans who love the band or their classic hit Ace of Spades should check this game out, too.

Get your motor running and find the next slot to play, such as Aloha Christmas, Disco Danny, Hotline 2 and Willy’s Hot Chillies.