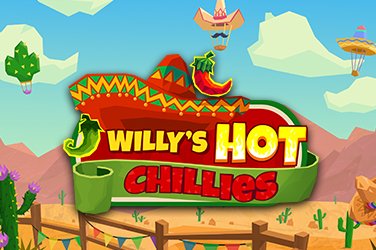 If you’re a fan of spoonerisms and the potential for a spot of innuendo then Willy’s Hot Chillies is the sort of slot game title that really catches the eye.

But let’s cut through the noise and see if this game packs enough heat to make it stand out from the crowd.

NetEnt’s Willy’s Hot Chillies plays out on a run of the mill 5×3 playboard featuring some unique takes on some traditional Latin American items, such as chillies and pinatas, alongside lucky clovers, treasure chests and playing card suits.

As far as the Returns To Player (RTP) percentage is concerned you’re looking at a rate of 96% which puts it comfortably above the industry average. We’re also looking at medium volatility, which combined with the generous RTP, make for a fun game that features plenty of small wins to keep you excited for the next spin.

A slight criticism of the visual side of things might be that the design of the playboard and backdrop is a bit rough around the edges, but the slight aesthetic imperfection is what gives the game its charm, while it’s lighthearted soundtrack brings an extra element of fun to proceedings.

Winning a prize on Willy’s Hot Chillies is nice and easy, with players just needing to line up at least three matching symbols on one of the game’s 20 paylines. Each symbol carries its own value and multiplier, with golden chest symbols being the most lucrative at 3x.

The bonus hunters out there will be pleased to know that Willy’s Hot Chillies has plenty to offer in that department. Willy’s Hot Wheel bonus is certainly one to keep an eye out for and can be triggered by just one bonus symbol on the first reel of the playboard, followed by at least one additional multiplier wild on any other reel. Multipliers worth up to 30x your original win can be picked up during this bonus round, as well as the bait of further free spins if you click your mouse at the right time.

We can often get bogged down in slot games that take themselves too seriously and have one too many spoonfuls of intensity. Willy’s Hot Chillies is the polar opposite of that kind of game and delivers a party atmosphere that truly makes each spin feel like a Mexican fiesta. Wins and bonus rounds are never too far away, while their playful concept helps to create a game that offers a warm welcome to players of all stakes and makes them feel right at home. So, come on, dust off that old sombrero you’ve got festering in the attic and come join the party!