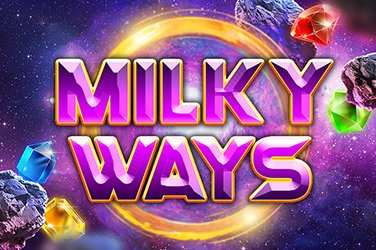 In a galaxy far, far away, you’re likely to find many fascinating and intriguing things – and in this instance, that includes the Milky Way slot game by Nolimit City.

Today, we’re going to investigate what exactly it is about this slot that makes it so unique.

We start off this journey with a nice 5×3 reel layout with an insane 243 ways to win, but once you really get into the thick of things in this game, that could rise to as high as 3,125 ways to win – which is the definition of a statement-making figure.

The standard play-card symbols have been jazzed up to fit with the outer space, Guardians of the Galaxy type theme, but we also have some specific themed symbols too such as the blue, red, green and yellow gemstones.

The return to player (RTP) percentage is so often pinpointed as an integral piece of the slot process, and that’s because it is for so many players out there. That’s also true for the Milky Ways slot game with the reported RTP coming in at 96.14%, and while that may be below the standard industry average, the medium volatility means that smaller yet more consistent wins are definitely on the cards.

It costs just $€£0.20 to get up and running with this slot with the maximum stake being set at $€£100, which is quite a decent amount to build up to – especially if you are a high roller. Then, the lucky few amongst you could walk away with 5,664x your initial stake as the maximum winnings.

The gameplay is a bit rigid at times, but even with that being the case, there’s still a really high level of enjoyment to be had overall of this slot. The soundtrack is fun, the storyline is colourful, and most importantly it helps us to dream of what life would really be like up there.

The special wilds can land on the three middle reels, all of which have multipliers attached that can double or treble the amount you earn. Oh, and if you land more than one Solar Wild in one win the multipliers are combined, meaning you could get up to a 27x multiplier upon landing three Solar Wilds.

You then have the Milky Way Spins feature which is triggered, of course, by landing three Milky Way symbols on the same spin – but it takes at least 66 spins to trigger it. From there you’ll have an expanded 5×5 reel that increases the overall ways to win to 3,125.

Oh, and there’s also the Fusion Spins feature whereby the winning symbols from a triggering spin are locked in place in preparation for a respin.

We like the charm that the Milky Ways slot game brings; from the strong possible winnings to vibrant theming, Milky Ways is worth a play or two.

There is a universe full of slots and games at Casino77. Next, you can try Lolly Land, Halloween Horrors, Emerald Isle and Shangri La.