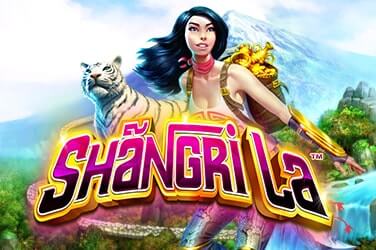 Powered by NextGen Gaming software, the Shangri La Slot Game is a mysterious, fantasy-themed video slot with five reels and 15 winning ways. Compatible across all devices, this fast-paced game has seven excellent bonus features offering winnings worth up to 3,000 times your total stake.

With a Return to Player (RTP) of 96.60%, the Shangri La Slot Game is considered a medium volatility slot.

The Shangri La Slot Game is based on a fictional novel, the theme immerses you in a mystical paradise, with glistening blue water and mountainous terrain. The design is colourful and the graphics are high quality, with seamless animations and a great accompanying soundtrack.

Symbols-wise, you’ll find a range of stunning animals including rhinos, elephants, and white tigers, alongside templates, swords, lotus flowers and the four playing card suits – diamonds, hearts, spades, and clubs. The most rewarding symbol is the white tiger, which offers a generous 500 times your stake if you land a full-house of five across any payline.

Shangri La Slot’s minimum bet is set at a reasonable $/€/£00.20, whilst the highest bet maxes out at $/€/£40.00 per spin. The maximum bet is relatively low, though not so low that it automatically excludes high rollers.

Players have the opportunity to have additional wilds added to the reels during any spin in the base game through the ‘added wilds’ feature, though there’s also the chance for any wild symbol in view on the three centre reels to cause the entire reel to turn wild.

The scatter symbol – represented by the gold statue – has a similar ‘added scatter’ feature which randomly adds extra scatters to the reels. If you land three or more scatters, you’ll be taken to a wheel where you’ll have the chance to enter one of four bonus features – free games, super free games, the chest bonus, and the trail bonus.

In the free games feature, you’ll be rewarded with eight free spins alongside an increased chance of the previously mentioned wild features occurring. This round can be retriggered once, so there’s the opportunity for 16 free spins in total.

The super free games feature works similarly, though you’ll be rewarded with 12 free spins – or 24 if you manage to retrigger it. In this round, the wild features are guaranteed to occur, so expect decent winnings.

In the chest bonus feature, you’ll need to pick chests to open, revealing prizes of up to 15 times your total stake. You can continue picking chests until you uncover the trap, which will end the round.,

The trail bonus feature presents a prize board and spinning wheel – you’ll need to spin to find out how many moves you can make. The game will continue until you land on the ‘x’, and there’s the chance to win up to 100 times your bet.

The Shangri La Slot Game is an action-packed slot, with four great bonus rounds and unique wild and scatter features. The free games bonuses offer the chance for plenty of free spins which can increase your overall win without having to place any more bets. The mythical theming is fantastic, and the graphics are impressive.