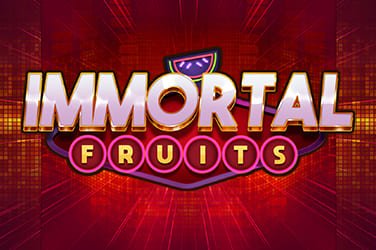 We’re used to epic, high concept slot games from Nolimit City, so we were pleasantly surprised to see them come out with a fairly traditional fruit machine with game show elements, which cuts out all the backstory in favour of big winning fun.

Immortal Fruits mixes the simple, easy excitement of a five-reel fruit machine with the Wheel Of Fortune style antics of a wheel spinning game for what we hope proves to be another hit from the highly-rated studio. But is this game immortal, or is it just ‘old hat’? Let’s take a look at our Immortal Fruits slot game review.

Immortal Fruits is about as classic as you can get style-wise, which is another surprise from a studio used to breaking the mould, featuring all your favourite fruity symbols on the reels such as grapes, plums, cherries, oranges and the Lucky 7. We did say it also incorporates game show elements, which are evident in things like the shiny red background that looks like a game show backdrop and the funky music that plays over the top as you spin. The animations and the sound effects are all very slick and well done, so you feel sucked into the game’s world very early on.

The Immortal Fruits slot game is one of those that’s very much about the bonus features, and the main game is really only there as a challenge to get you to those bonuses. The highest paying symbol in the main game is the Lucky 7 which forks out 1000x your stake for five, not bad, but there are much better totals to be had in the bonuses. Nolimit City class this game as extreme volatility, so you should probably be expecting it to withhold the top prizes, though the RTP of 96.06% is actually fairly generous for a high volatility slot, so it’s not as harsh on players as you’d expect.

Landing three Bonus xWheel symbols brings up the big wheel element of this game’s mechanics, where a lot of the big wins are to be had. The wheel starts off massive and has three sections: outer, middle and inner. These sections each have ten segments which contain cash prizes, multipliers and a level up function, and it’s your aim to hit the level up and try to jump into the next section, with the ultimate aim being to get to the middle. Landing one of the multipliers twice or hitting a jackpot dumps you out of this game, though with the jackpot and all the multipliers you have collected applied, while your target is the big 2500x jackpot that lies in the centre wheel. Hit that with a few multipliers attached and you’re in for a massive win! As in other Nolimit City games, Immortal Fruits lets you gamble double or nothing on every win, so you can boost your prizes even further!

Nolimit City has proved that they can do the basics and the complicated stuff and turned out an entertaining and fascinating fruit machine with massive win potential. Immortal Fruits is about that bonus feature, which leaves the rest of the game feeling pointless, but you won’t be complaining when you land a massive jackpot after just a few spins!

We have hundreds of slots that can bear fruit. Check out Parrots of the Caribbean, Space Raiders and Robin Hood and his Merry Wins.