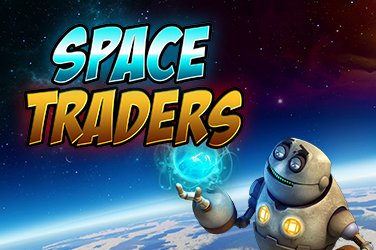 In thinking outside of the box, slot providers can so often create something that is both unique and bizarre – which, as we’ve come to learn over the years, can prove to be a lethal yet satisfying combination.

Today, we’re going to take a deep dive into Revolver Gaming’s Space Traders slot game to see what we can discover.

The Space Traders slot game is laid out in a 3×3 reel style, but in actuality, each of the nine spins serves as an individual reel within itself – meaning that there aren’t actually any paylines to speak of. You’ll receive wins based on how many identical symbols pop up on the reels at the same time for every spin.

There’s plenty of theming to be found here too between symbols such as Handy Max, Robot Sam, a planet, space junk and more.

The return to player (RTP) percentage is going to be at the heart of most slots regardless of whether or not you engage with it, and the same is true for the Space Traders slot game. The reported RTP comes in at 95.99% which is below the standard industry average, but with low to medium volatility, a steadier stream of smaller wins is definitely a possibility.

There’s a cartoon element to the theming here that we actually find quite charming, all things considered, and while the gameplay can be rigid at times, we still really appreciate the effort that went into the details behind this slot.

Any symbol outside of the soon-to-be mentioned bonus can be activated as a special icon, and if you land three or more special symbols at any one given time, the prize money on offer will actually be doubled. The special symbol will be chosen at random before every single spin, so you should never expect to know what’s coming next.

There is also a Special Junk Bonus in which you will find Queen Bea offering out some special items, with up to five being on offer.

There’s an argument to be made that the developer could’ve gone even further with the concept behind the Space Traders slot game but as a whole, we really enjoy the finished product. The theming is unique, there’s actually quite a lot of money to be won, and it’s a fun little storyline that is pretty easy to follow once you get the hang of it. It’s a bit niche, we admit, but it’s definitely worth your time.