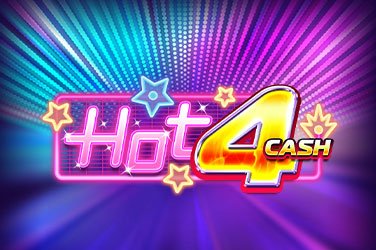 Hot 4 Cash, from NoLimit City, is an exciting and interesting video slot game, with some cool new features that can deliver outstanding returns for you!

Retro themes have always been popular for video slot games, and that is the case with Hot 4 Cash as well, with visuals that are a throwback to arcade style slot games. There are a lot of bright, neon colours and psychedelic effects, to go with an ambient soundtrack that could easily become a cult classic on its own, so overall, the theme is extremely pleasing and will certainly provide a lot of entertainment for players.

The background of the game sees waves of purple, pink and blue, while the grid is also not in the usual shape that one would expect to see in a standard online slot game. There are bright lights around the reels as well, while the reels themselves are a deep blue colour which helps them stand out against the bright backdrop. While this could have been a basic 3×3 grid game, NoLimit City have made it a lot more interesting by having two more reels and keeping the grid in an unusual 2,3,3,3,2 shape.

There are 10 fixed paylines in the game, and players can bet from $/€/£0.10 to $/€/£100 per spin. There is the option to use the Turbo mode by pressing the lightning icon next to the Spin button, which will speed up the gameplay, while you can also choose to use the automatic spins option for up to 100 spins, with customizable settings to ensure that the play stops for pre-decided win and loss limits. You will get wins for landing three matching symbols across one of the 10 paylines, from left to right and starting from the first reel.

The symbols are clean, with just three colours used – red, green and blue. There are also just three symbols on the reels – cherries, diamonds and lucky 7s. The combination of colour and symbol determines your payout. Blue is the lowest-value colour, followed by green and red, while cherries are the lowest-value symbol, followed by the diamonds and then the lucky number 7s. Thus, a blue cherry will be the lowest-paying symbol, while a red 7 is the highest-value icon.

There is also a Disco Wild, which will substitute for any of the other symbols on the reels, but it only lands on the central reel. However, when it does land, it can expand either horizontally or vertically, generating more Wilds and creating more winning potential.

The game has a central 3×3 section, and the four corner reels are Hot Spots, having the ability to trigger one of the three bonus features. Landing the same symbol on these four Hot Spots at the same time will give you 7 Super Free Spins. Here, those four Hot Spots will become Sticky Wilds, with any more of those symbols landing on the reels also turning into Sticky Wilds. With the Disco Wilds also active, this can create some big wins for you.

The Colossal Spins feature is activated by landing four of the same symbol. Now, all the symbols in the central 3×3 grid are turned into one giant symbol, which can then substitute for any other variant of that symbol, again creating the chance for large prizes.

Having symbols with the same colour across the four Hot Spots will trigger the Lucky Wheels feature. The blue wheel will spin first, providing either a multiplier or a level up, which will take you to the second green wheel which has higher multipliers. Again, there is a level up option, which will bring up the final red wheel. Here, you can win a multiplier of up to 10,000x of your stake.

This is a medium to high volatility game with an RTP of 96.05%

This is a highly innovative slot game from NoLimit City, and the use of an asymmetric grid and some exciting bonuses makes it a fun and entertaining game for all types of slot game players.

If you’re hot for some other slots, why not try Imperial Fruits 5 Lines, Burning Wins, Sakura Dragon and Rome: Caesar’s Glory.