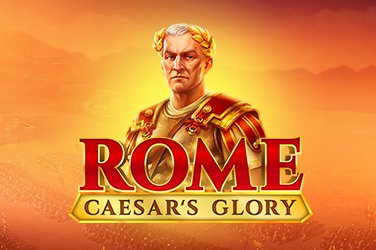 Rome Caesar’s Glory is certainly not the most original of slot games on the market but that doesn’t mean that it doesn’t offer an immersive gaming experience to players, while its 1700x jackpot provides plenty of pull to potential punters.

One thing that may take players by surprise on first glance is the game’s playboard, which has an increasing number of playing symbols from left to right, with two symbols on reel one, three on reel two, and so on, until you reach the final reel, which has seven symbols. It’s easy for developers to go down the well-trodden route of 5×3 playboards so it’s refreshing to see something different here.

The Returns To Player (RTP) rate for Rome Caesar’s Glory comes in at 96%, which is just above the industry average and the 95% minimum benchmark we recommend players aim for when selecting a slot. That said, during our testing session we experienced a relatively high volatility so be prepared for potential grinds between wins, although they do tend to be worth the wait when they do come around.

A big playboard tends to mean a lot of paylines and that can certainly be said for Rome’s Caesar’s Palace, which as a healthy 64 paylines for players to take advantage of, and incremental regulation payouts are available to players who line up at least three matching symbols, with high payouts on offer if you can land up to five in one spin. This ranges from smaller payouts for matching playing card symbols, through to premium-paying Roman centurions, swords and soldiers.

The aesthetic side of things on Rome Caesar’s Glory could perhaps do with a touch-up The deep, intense backdrop has a lot of potential to be really brought to life but is a bit “meh” in its current format. The playing symbols themselves aren’t particularly unique either and have a very familiar look about them.

You can pick yourself up a decent free spins bounty if you pick up at least three golden eagle scatter symbols, and this will land you at least eight free spins. Caesar himself comes into his own during this round too and acts as the game’s main wild symbol, substituting every symbol on his reel into potentially lucrative combinations and prizes.

The Rome’s Caesar’s Glory slot game certainly doesn’t pull up any trees from a visual perspective, and is not the most original game in the world. However, there are still some quirks to it that make it a solid option for players looking to try something new. A respectable RTP creates a low barrier to entry for players, and combined with a high jackpot, it should still be a popular game for punters. As you can probably tell, the team here is very much split, so why not give it a try for yourselves and let us know what you think!