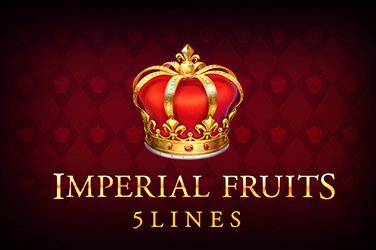 Fruit machines have a bit of a reputation for being cheap and cheerful slot machines: nothing fancy to play, but lots of good clean fun and some decent prizes if you’re lucky. Well developers Playson have been on a bit of a mission recently to bring the fruit machine into the 21st century, releasing a rash of new fruitys with all manner of themes, and Imperial Fruits 5 Lines is the Waitrose end of that particular spectrum.

With royal ambitions and fancy graphics this is a fruit machine for the sophisticated gentleman, but does it have prizes to match? Let’s take a look in our Imperial Fruits 5 Lines review.

Imperial Fruits 5 Lines seems to go out of its way to pile on the luxury in this slot, with sumptuous scarlet wallpaper embossed with imperial crowns. The symbols themselves look like something painted by a Dutch master, all light reflections and drips of water just like an oil painted still life. Most of the symbols are ones you’ll recognise from the good old days of fruit machines, including grapes, cherries and plums, while imperial crowns and different coloured stars make up the highest value symbols in the game. There isn’t much by way of animation or soundtrack, except for the standard noises a fruit machine game tends to make.

The Imperial Fruits series has a variety of entries with different mechanics employed, following the general trend that more pay lines equals lower prizes and more wins, while fewer pay lines equals larger prizes. This is absolutely the case in Imperial Fruits 5 Lines, which brings only five pay lines to the table but packs a top prize of 400x the stake, resulting in a maximum jackpot of £/€/$200,000 – not bad for a fruit machine! This also results in a very nice RTP up at 96.71%, well above average, so you’ll get quite a bit of bang for your buck.

The look of Imperial Fruits 5 Lines is a classic slot game at heart, but there aren’t many exciting special features to play with beyond what you find in the main game. However , there are two types of bonus symbol, the imperial crown and the star scatter, which do have special abilities. The crown can substitute for other symbols as well as expand to fill a reel and generate more combinations, while the star can appear in silver, gold or diamond form to generate the highest wins in the game. As with other scatters, it can do this no matter where it lands, and doesn’t have to land in a line to generate wins.

Imperial Fruits 5 Lines is an updated re-imagining of a classic style of slot game, and while it doesn’t stray too far from the path in terms of the game mechanics, there are some nice little upgrades here and there to go with the revamped visuals. Best of all, the top prize of £/€/$200,000 is more than enough to tempt even the most conservative gamer into giving this one a spin!