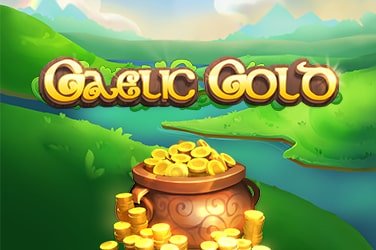 It’s understating it a bit to say that Leprechaun slots are two a penny these days, thanks to the Irish theme being so popular with gamers, but our ears did prick up a bit when we saw that Gaelic Gold was developed by Nolimit City, a studio with a great reputation.

Excellent graphics and some deceptively clever mechanics combine to make this a great little slot to play, but will Gaelic Gold bring you the luck of the Irish or is it cursed? Let’s find out in our Gaelic Gold slot game review.

Gaelic Gold is a very traditional take on the good old Irish slot, resurrecting just about every Irish trope you can imagine. The background to the reels is an impossibly lush green valley of clovers with a bright blue river running through it and a sunny sky with light rain falling, and the stereotypes don’t stop in the background! The symbols themselves include foaming flasks of beer, leprechaun shoes and hats, lucky horseshoes and the royal symbols J-K re-designed in floral Celtic form. The art style is a little different and you might even say there’s something a little anime about it, but the jolly Irish music and the lovely animations of coins and shamrocks bursting across the screen are as traditional as they come.

While this is a thoroughly modern slot in the way it looks, the mechanics will remind you of classic games with its three by three layout and just five pay lines to play with. The maximum bet is high at £/€/$100 per spin, and while there may not be as many betting options as you might be used to, it does mean that winning combos are easier to form, with three golden clovers or Leprechaun wilds paying 75x your stake. This is confirmed by the slightly above average RTP of 96.15%, meaning you stand a good chance of bagging some wins. You also benefit from Nolimit Cities xNudge feature in the Gaelic Gold slot game, which causes stacked wilds in which any part of the wild lands on screen to be nudged fully on-screen by the machine. Even better, each of these nudges adds 1x to the multiplier the wild provides, shown on the coin the Leprechaun is holding! The real fun starts when you find the pot of gold, however.

When you land the pot of gold scatter in the middle of the reels, the Rainbow Spins bonus round kicks off. First, you’ll be offered the chance to pick from nine coins, all of which offer different bonuses from extra free spins to multipliers and extra pay lines to play with, and you can keep picking until you find the Start coin. Then you get five free spins plus whatever bonus spins you won, with four extra rainbow pay-lines plus whatever added rainbow pay lines you won. These, combined with the potential for multipliers, can make for an extremely lucrative round. Especially if you also land wilds in this round, whose multipliers are added to your bonuses for even more wins!

Gaelic Gold is a great looking slot that packs all of Nolimit City’s skill and creativity into a package that might look familiar but still manages to bring with it a ton of exciting features you might not have seen before. You may not have the luck of the Irish, but you’ll have fun!

We have some slot gold for you to find in Foxin Wins, Foxin Wins Again, Owl Eyes and Kalahari Safari.