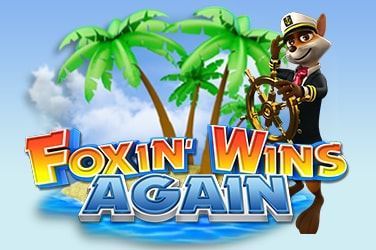 The Foxin Wins Again slot game is another game created by the superb team of people at NextGen Gaming. This one was released in October 2014 so it has been around a while and is said to be one of their less popular games.

As with the majority of the NextGen Gaming slots, there are some excellent graphics on display and a very simple to use interface. Foxin Wins Again can be played across all desktop, mobile and tablet devices.

Foxin Wins Again takes is another nautical offering where we are invited to join him on a luxury cruise ship which will hopefully guide us to the glory of the big wins and monster payouts. Foxin Wins Again is a five-reel video slot and has 50 paylines.

There are a number of icons in play in the Foxin Wins Again game. The lower ones are the 9, 10, J, Q, K and A playing cards and there are also foxes, a ship, a compass and a cocktail glass. There is also Foxin on the deck which is the highest paying regular symbol while Foxin at the wheel is the Wild. The ship’s bell acts as the Scatter.

Two bonuses are in play in the Foxin Wins Again slot game. The first is the Free Spins feature which is launched when you match three or more of the Scatter symbol across the reels. You get given 10 free spins and these come along with a 2x multiplier so all of your wins are doubled.

There is also a second chance option. Should you not be content with what you have won courtesy of your free spins you have the chance to try again. The free spins feature can be retriggered which is an added bonus to proceedings.

The other feature in Foxin Wins Again is the NextGen regular, the Gamble feature. You have the opportunity to either double any base game win or quadruple it by guessing what the next card will be. You double a win by guessing the colour right or quadruple it by choosing the right suit. If you choose wrong you lose all of that win so be careful what you choose to do.

The RTP rating for the Foxin Wins Again slot game is 95.87%. That is very much below the average and is much better for the house than the player.

The Foxin Wins Again slot game is quite a fun game with the graphics strong as you expect from a NextGen Gaming offering. You also expect excellent features and Foxin Wins Again has that too. There are enough wins in the base game and while you need the features for the bigger wins, they can be activated pretty easily. It doesn’t take long to get hooked into cruising the waves with our favourite fox so if you are looking for an enjoyable slot then Foxin Wins Again is certainly worth a try!