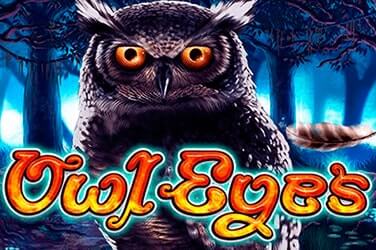 The Owl Eyes slot game was delivered to the market from the excellent team at NextGen Gaming. It was introduced to the market back in August 2014 so it has been on the landscape for a fair while now.

There is a big of a spellbinding nature to the graphics on the Owl Eyes slot but the interface is very easy to navigate. There is a futuristic soundtrack which accompanies the game. Owl Eyes can be played on desktop, mobile and tablet devices.

Owl Eyes is a mixture of magic, enchantment and nature all merged into one! The woodland setting provides you with the backdrop to immerse yourself in the night-time and fly off with plenty of appealing rewards! Owl Eyes is a five reel slot with 50 paylines.

The icons used for the Owl Eyes game are a little different to the usual ones we associate with slots. They include toadstools, skunks, badgers, feathers as well as a tree which has a human face on it. Pin five of these to the one payline and you will win 1,000 times your stake! The Owl acts as the Wild in this game while the moon is the Scatter.

Owl Eyes isn’t blessed with features but there are a few bonuses which can lead to bigger and better wins. The first of them comes through the Wild icon which in Owl Eyes only appears on reels 2, 3 and 4 while in the base game, however it can land as a Stacked Wild which offers up a lot more chances to win. Any wins which include the owl Wild will come with a 2x multiplier so your winnings are doubled.

It is the moon Scatter which is the better one to land though. Three or more of these could reward you with between 2 and 100 times your first bet. You also activate the one bonus feature there is and get given five free spins. Although five spins is a bit on the stingy side, the good news is that they come with the possibility of more Stacked Wilds and it can be retriggered should three or more Scatters appear during any one of those spins.

The other feature is the standard NextGen Gamble feature. You have the opportunity to either double any win or quadruple it by guessing what the next card will be. You double a win if you guess the colour right or quadruple it by picking the right suit. If you choose wrong you lose all of that win, so it is a risk and reward decision

The RTP rating for the Owl Eyes slot game on the low side at 95.30%. That is well below the average for a modern slot game and not on the side of the player.

Owl Eyes is an interesting and entertaining game to play. The pleasant sounds and the animated graphics give it a nice feel and although you will struggle to win life-changing amounts of money, there are big wins to be had within this slot game. The features are nice and simple and can offer up extra chances to win so for a game that doesn’t carry a huge amount of variance this one ticks a lot of boxes.