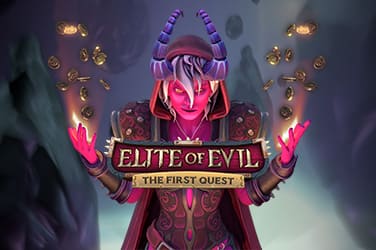 Elite of Evil The First Quest is a horror-themed slot game from Gluck Games that has the potential to deliver quite a few frights, but you will also be able to pick up some big wins on your journey through this spooky and scary game.

On starting the game, you will find yourself in a mysterious and mystical grey dungeon, with two gold portals on either side of the reels. The various control buttons at the bottom of the screen are in pink, however, which is a nice contrast to the overall grey theme of the game. In front of the portal on the left stands an evil sorceress, while there are five smaller energy symbols on top of the reels as well. The game has six reels, six rows and 243 paylines, while there is a cluster pay mechanic which can be quite attractive as well. Players can bet from $/€/£0.20 to $/€/£200 per spin.

The cluster wins mechanic means that players are rewarded for any matching combination of four or more symbols that line up either horizontally or vertically, rather than on a payline.

Those five symbols on top of the reels are the icons that will appear on the reels themselves. The green clover, orange fire and red feather stones are the standard symbols, with a minimum payout of 3 coins and a maximum payout of 10 coins, depending on the number of symbols and the particular symbol that is landed in combination. The blue lightning and purple moonstones are the low-paying icons, only paying out anywhere between 0.50 and 2 coins.

There are several bonuses in this game that will definitely increase your chances of picking up big wins. The first of these is the shard explosion – on a matching combination of four or more symbols, any of the symbols that are touching the blue lightning symbol will explode, allowing new symbols to take the place. A similar mechanic is in play for the cascading reels feature, with all winning combination symbols exploding whenever there is a win, allowing new symbols to drop down and take their place. A multiplier is also applied to this win, and increases with every subsequent cascade on the same spin, with a maximum payout of 5,000x through this feature.

The free spins round can give the player anywhere between 10 and 22 free spins, depending on the number of symbols that triggered the round. Every win in this round increases the cascading multiplier by 1x, and this does not reset till the end of the round.

Matching a combination of bonus symbols will open up the bonus game, where the player will have to choose from between two and five treasure chests, depending on how many bonus symbols were used to trigger this round. Each chest will award a cash prize, with the total amount then being added at the end of the round.

Completing the specified number of combinations on the reels for each symbol type will take you to the Boss Fight feature, with five different bosses to defeat, based on each of the five symbols on top of the reels. Defeating a boss will reward you with the Jackpot Wheel, which has five tiers and includes prizes such as free spins, cash prizes and multipliers. The value of prizes on the wheel grows with every boss win, so the player could potentially win up to 2000x of their stake or 22 extra spins if they manage to defeat all five.

This is a medium-volatility game with an RTP of 97.5%

This is an excellent game from Gluck Games, with the sheer variety and number of bonuses making it extremely entertaining and potentially rewarding as well.