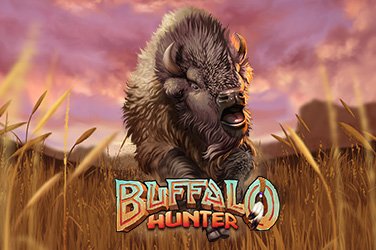 We’re heading for the vast and verdant plains of the American Midwest for this next slot, which celebrates the people and animals of that romantic part of the world as it was long ago before supermarkets and petrol stations moved in.

Buffalo Hunter has a strong spiritual core to it, combining Native American themes with a love of the animals who live on the plains, especially the iconic American Buffalo that was so central to the lives of the Native peoples in that area. But does this slot pay well too, or is it going extinct? Let’s take a look at our Buffalo Hunter slot game review.

Buffalo Hunter is a slot by NoLimit City, which has become a byword for quality themes and inventive mechanics, which is exactly what you get with this game. There are no people at all in this slot, although the Native American influence is obvious wherever you look, from the totem poles which surround the reels to the Native items and headdresses worn by the low value 9 – A symbols. The high-value symbols, however, are all animal themed and include a deer, a fox, a cougar and eagle and a buffalo. The soundtrack is quite hypnotic, composed of the sound of a Native flute with chants and shouts to back it up, while the drumming and animal noise sound effects, as well as the nifty little animations, really help sell the theme.

The Buffalo Hunter slot game gives you one more row than you might have bargained for, four instead of three, while the 40 pay lines are fixed and can’t be adjusted. This game is described as extremely volatile by the developers, which makes sense when you see that the maximum payout is 50x your stake on a betting limit of £/€/$100. That’s not a lot, and with a slightly above average RTP of 96.01% you have to assume that there’s a lot of cash jackpots to be had in the bonus rounds in place of regular wins in the main game. There is also the mystery symbol in play, something carried over from other NoLimit City games, which transforms all instances of itself on the reels into the same symbol when it lands, and generates some nice wins.

As predicted there are actually three whole bonus rounds to play in this game, and which you’ll play depends on how many scatters you land. Three or four will allow you to choose between the Buffalo and Prairie bonuses, which have slightly different mechanics and volatilities. The Buffalo bonus places a gold ring around some of the top-paying bonus symbols, and each one you land will add to a meter on the left of your screen composed of all the other animal symbols. As you fill the meter up each animal is replaced by a buffalo in turn, which also transforms each example of that animal on the reels into the buffalo symbol too. In the Prairie bonus, you’ll be playing something that looks much more like the main game, except the animal symbols have multipliers up to 5x on them, which adds to the volatility. Finally, players who manage to open the bonus game with five scatters will play the Stampede Super Bonus which combines the two games, meaning you’ll turn the animal symbols into buffalo with multipliers on them, meaning you can create a top win of 10,000x your stake!

Buffalo Hunter is another excellent game from NoLimit City, with their usual combination of top-class visuals and an exciting theme with fantastic prizes and fun bonuses to help you boost your winnings. The main game feels pointless when all the cash is in the bonuses, but you won’t complain with 10,000x your stake in your pocket!

Are you hunting for more slots to play? Give these a try Dragon Spins, Wishes and the Big Deal.