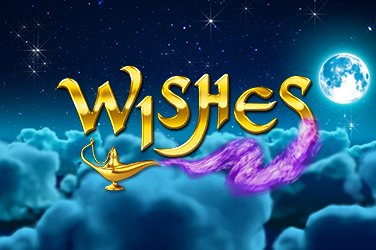 Revolver Gaming’s Wishes slot is an Aladdin-inspired game that also features traditional themes that work together to create a nicely balanced game that has a quick, immersive tempo, with a few twists along the way.

But enough about that. Let’s crunch some numbers to see just how good Wishes is…

Wishes plays out on a 3×3 playboard with 9 paylines, which means that the game is either going to be your cup of tea, or it isn’t. Some players prefer the organised chaos of multiple paylines, but a small playboard with limited paylines keeps things simple from the off.

If you’re a fan of fancy, elaborate symbols then you may feel somewhat undernourished by the collection of BARs and 7s that make up the majority of the objects on the playboard, with a few spaces reserved for their Wishes and Genie’s Gifts logo Wilds.

A far as stakes are concerned, players can wager as little as $/€/£0.09 per spin, while the high rollers amongst us will be licking their lips at a max spin-stake of up to $/€/£225.

The Returns to Player (RTP) is a vital pillar in any slot game and Wishes clocks in at 95% which is just about average on the slot spectrum. Having given the game a try ourselves we rate the volatility at somewhere between “medium” and “high” meaning you may have to be a little bit patient for those wins to come around but are usually worth it when they do.

As far as aesthetics go, the theme is very much taken from a classic Arabian desert setting, with historic sandy buildings in the backdrop. During your session, you are accompanied by an unnamed genie, who also acts as your cheerleader with some fun movements when you bag a winning combination. The Arabian theme continues with a soundtrack that cynics might describe as a tad dated, but it does the job and adds extra authenticity to the concept.

The genie also comes into her own when you land a couple of logo Wilds, which introduce a fourth reel to the playboard, offering up a range of multipliers, depending on which symbol the rotation stops on. Once your multiplier has been selected, one more spin takes place to determine your final prize.

Also keep an eye out for random wins, known as Instant Payouts, as well as additional multipliers that are applied at random. There is also the chance to bag 10 free spins if you accumulate enough jewels on the game’s meter.

We’re all looking for those slot games that will have us coming back for more, but while Wishes is perhaps not one of those, it’s still a game that you should try at least once. The concept isn’t anything new to us but is well executed, while its steady RTP and easy-to-track pay structure make it a relaxing gaming experience that doesn’t require a great deal of attention or dexterity.