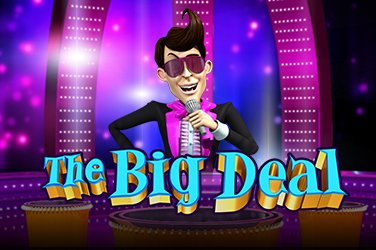 Within modern society we all enjoy a good bit of fun on our TV screens – and you could argue that game shows provide us with that more than most. From the cheesy presenters to the rules themselves, there’s a lot to love.

Today, we’re going to take a look at Revolver Gaming’s The Big Deal slot game and see whether it succeeds in taking us on that oh so special trip down memory lane.

From the moment you load this game up, it’s clear to see that it’s going to move at a million miles per hour – which we love. It features a fairly standard reel layout of 5×4 which allows all of the symbols in question to breathe with 30 fixed paylines to work your way through.

The standard playcards are present and have been designed in a way that fits in with the theming, and we’ve also got some themed symbols to enjoy such as the quizmaster, the assistant, lots of money and the contestants – James and Mary.

The return to player (RTP) percentage is a figure that cannot be escaped, even by the most cynical of slot players who would prefer to go in blind and see what happens throughout their gameplay. The same is true for The Big Deal slot game with the reported RTP coming in at 95.90%. It’s safe to say that this is below the standard industry average but with everything else that is on offer in this slot, we’re not so sure it’ll be viewed with as much importance as it otherwise would’ve been.

With regards to the payouts, very few details have been released regarding the actual numbers involved.

Visually speaking the animation work could be more fine-tuned, but in terms of the design itself, we love it. It’s loud, it’s obnoxious and it’s in your face from the stereotypical soundtrack to the bright colours and the personality tornado that is the quizmaster.

You’ll want to keep an eye out for the big green wild which appears stacked on the reels as well as the blue star which is the bonus (scatter) symbol.

Big Spin – this bonus is triggered by landing at least three of the bonus symbols on the reel, and from there, you get to spin an actual wheel to receive one of the following features.

Hi-Lo Move Up – go up a prize grid by guessing the numbers through a higher or lower system.

Kaplinko! – drop three balls into the system to try and win cash prizes.

Pink-N-Match – pick spots on a grid until three matching pairs of rewards or multipliers are located.

Free Spins – you’ll get five free spins with a 3x multiplier, eight with a 2x multiplier or 15 with a 1x multiplier.

The Big Deal slot game is entertaining and outrageous in equal measure and for that reason alone, it gets our seal of approval. From the mystery surrounding potential winnings to the bonus features that really do highlight the work that has gone into making this a success, we think this is a slot everyone needs to try.