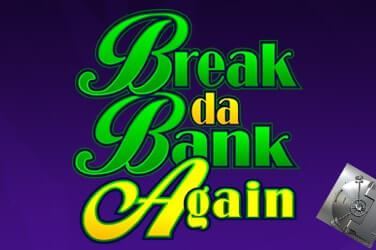 Break Da Bank is one of Microgaming’s biggest smash hit successes, and while it might be hard to believe that it’s been more than 10 years since the original came out, we think it’s more than time for a cheeky sequel!

The Break Da Bank Again slot game is definitely an upgrade, but Microgaming haven’t gone about reinventing the wheel here, and there’s a lot you’ll recognise from the first one. Chief among those things is the visuals, which haven’t changed much at all, and still boast those same shiny 3D images of gold, jewels, coins and cold steel. The reels are bordered once again by the big steel safe from the first game, the one you’ll be cracking, while the high-value symbols are those same images of gold bars and stacks of coins, mixed in with some valuable looking precious stones. Plus, once again, the low-value symbols are the standard Microgaming themed 9 – A. Clearly, this game is prioritizing its mechanics over its looks, but that’s not the worst decision they could have made, given how fun the first game’s mechanics were.

Break Da Bank Again isn’t one of those slots that stays popular by adding loads of new features or re-inventing the graphics every few years, it gets by thanks to some solid and simple mechanics that play well, which is exactly what you get here. It’s all pretty basic with three rows and five reels, nine pay lines, and a maximum bet of £/€/$22.50 per spin while your highest paying symbol is the blue gem that garners you 166x your stake for five in a row. The RTP is even pretty average at 95%, so where is all the money? Well, you’ll be pleased to know that Break Da Bank’s famous bonus round is back and ready for another spin!

The bonus is another area of Break Da Bank Again that is solid and simple, and you can activate it simply by landing up to five of the bank vault scatters for as many as 25 free spins. That’s a nice chunk of spins, but you can add to this number by landing more vault scatters in the game, getting one extra spin for each symbol you land. On top of this, every win attracts a 5x multiplier in the free spins game, while all wins that include the game’s logo wild are multiplied by an enormous 25x! We can’t say enough how much this changes the game, and a good run in the bonus round can take you from a disappointing set of spins to a massive total in just a few seconds!

Break Da Bank Again isn’t a revolution and just delivers more of what made the first game so popular, but with some added extras and a few tweaks. This game shows what has kept it so popular for more than a decade, providing good simple fun with some excellent prizes and amazing bonuses without overdoing it on features.

If you’re looking to break a few other slots, we have hundreds at Casino77, including Deadmaus, 777 Royal Wheel, Noble Sky and Retro Sky.