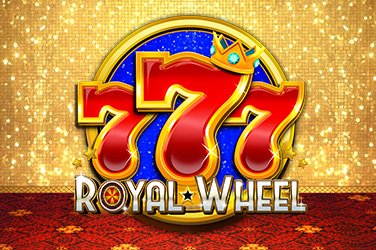 While some games go out of their way to build up a little mystique around their theme and try to get you caught up in the story, others never pretend to be anything other than a slot game. That’s definitely the case with 777 Royal Wheel, which looks like something out of the glory days of TV game shows.

There’s plenty of glitz and showmanship present in this game, but is there enough cash there to back it up? Let’s take a look in our 777 Royal Wheel slot game review.

The 777 Royal Wheel slot game by Microgaming certainly looks the part, and if you squint you can easily imagine that you’re in a classy casino surrounded by beautiful people and high rollers. Everything is there, from the red velvet curtains to the shimmering gold backdrop and the horrible casino carpet while the reels are displayed on a gold gaming machine with half a wheel protruding from the top. This game isn’t pretending to be anything other than a casino game, so the symbols are pretty classic, including the standard 9 – A as well as BAR and lucky 7s in combinations of one to three. There’s also a wild in this game in the form of a crown, which is very important to how this game plays. Easy listening jazz serves as the soundtrack, while the sound effects are all very mechanical as if you’re playing a real machine, with just a snare drum hit whenever a winning combo is made.

The layout of this game is fairly straightforward with five reels and three rows with 25 pay lines to play on, though we do like the re-spin feature that comes as part of the main game. Every winning combination automatically generates a re-spin in the hope of finding more matching symbols to add to the combination. The re-spins keep coming as long as you keep adding more wins, and only stop when no more wins are possible, helping to build big combos. You’re going to need these to do well, because the highest possible win is 12x your stake with 5 crown wilds, though a good run on the re-spins can easily boost that much higher. The maximum bet of £/€/$75 per spin is fairly high, but a low RTP of 94.4% means you’ll need to bet close to the top in order to make serious cash.

The bonus feature in this game is a little strange as it appears entirely at random and isn’t activated by any scatter or bonus symbols. It involves the big wheel at the top of the screen, which spins and highlights one of the symbols you find on the reels. Whichever symbol it chooses is replaced by a 2x multiplier wild version of itself in every instance it appears on the screen, which can lead to some seriously tasty wins when you combine this with the re-spins round.

777 Royal Wheel doesn’t waste any time with elaborate themes or backstories, and you can get straight into the fun of betting and winning on an old fashioned game show game. That’s not to say it doesn’t look good, and the whole game is well designed and rendered, while the re-spins and bonus wheel features are great money-spinners in their own right.