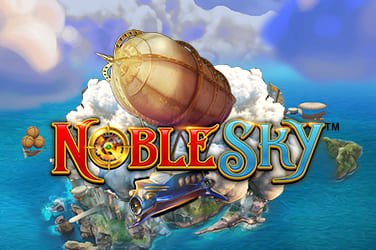 It’s time to put on your helmet and adjust your goggles because we’re taking to the skies to find fame and fortune in Noble Sky, a cool looking steampunk-inspired game by Neon Valley Studios.

There’s no shortage of shiny brass and ingenious looking machines in this slot, while heroes are traditionally dressed in top hats and capes as they begin a hunt for a mysterious vault full of gold for their paymasters. So there’s an interesting story to play with, but will you get a share of the gold or will you feel robbed? Let’s take a look at our Noble Sky slot game review.

We’ve already talked a little about the theme, but the steampunk visuals truly do make this game stand out from the crowd. The background to this slot is a glorious twilight vista over sunlit clouds, while a Victorian-inspired city unfolds on the ground below. The reels themselves are bordered by brass machinery covered in gears and cogs, while the symbols themselves are a combination between strange steampunk machinery and the heroic explorers themselves, including an aristocratic-looking captain, a female explorer and a female mechanic. Unfortunately, the low-value symbols are the standard 9 – A, though they all look like they’ve been made of pressed metal. The soundtrack is suitably optimistic and epic, the perfect accompaniment to a voyage in the clouds, while fun and energetic animations complete the theme.

Despite the dreamy and exciting possibilities of the theme, the gameplay is rather more standard, with a traditional five-reel and three-row layout that boasts 25 pay lines to play on. The top bet is just £/€/$50 per spin, which isn’t especially high, but it’s more or less what you’d expect from a low volatility slot such as this where neither the wins or losses are going to be that extravagant. In that vein, the highest paying symbol is worth just 20x your stake, so if you want to take advantage of the above-average 96.12% RTP you’ll need to hit those higher value symbols and features as much as possible. One of the symbols that will help you with this is the airship wild, which appears fully stacked, and still pays even if only part of the ship is visible on the reels.

The airship wild is actually a really important part of the Noble Sky slot game, but it only realizes its potential when it lands fully visible on the reels. At this point, you get to play the re-spins feature, where the airship wild will jump one reel to the left with each spin also generating multipliers as it goes, maxing out at 10x. This happens whenever you land the airship wild, so it’s a lucrative feature that can grab you some excellent multiplier wins. A second feature involves the vault at the bottom left of the screen, which has coins added to it whenever you land a symbol with a coin icon overlaid on top of it. Once the vault is filled you get to play a pick and win game, choosing between 12 gold coins until you’re able to match three jackpot symbols, at which point you’ll be rewarded with that jackpot up to 5000x your stake.

We love the look of Noble Sky, but we were even more impressed by the fun bonus features that can really help boost your prize money. It’s not a game that’s likely to make you rich beyond your wildest dreams, but you can have fun and make a tidy sum without too much risk, while that 5000x jackpot is tempting for anyone!