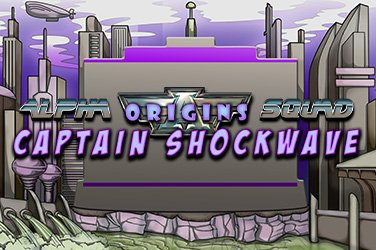 Apart from being a mouthful that’s out of this world, Alpha Squad Origins Captain Shockwave is a superhero story slot that will have you on the edge of your seat! What does the Marvel universe have that Saucify! doesn’t have?

There’s no requirement to have played the original Alpha Squad to enjoy this one, but one thing you may notice is that the style is surprisingly different. While Alpha Squad made use of 3D graphics to depict a shiny, metal world of fast cars and dangerous baddies, Alpha Squad Origins Captain Shockwave features a much more comic book type look. The background to the reels is a futuristic city drawn in a cartoonish style, while the symbols on the reels themselves all look hand-drawn and coloured as if they’re straight from the pages of Detective Comics or 2000 AD. The low-value symbols are the standard 9 – A given a superhero makeover, while various stills of Captain Shockwave’s story including him as a regular farm kid and in crime-fighting poses make up the high-value images.

There are a couple of nice surprises that you’ll find straight away when you play Alpha Squad Origins Captain Shockwave, most notably the 50 paylines that you have to play with. This usually comes with a lower betting limit or lesser prizes as a trade-off, but you can bet as much as £/€/$125 on a single spin in this game, so no trade-off so far! There’s also some decent wins to be made in the main game using the regular symbols, with the top paying image of little Raymond in front of an old fashioned TV raking in 1200x your stake. That’s not to mention the Captain Shockwave wild, which grants you a whopping 6000x your stake for five or doubles the value of any combination it appears in! The game actually has a slightly below-average RTP of 95%, but don’t worry, because there are some seriously tasty bonuses to help you beat the odds!

Unusually there are actually two kinds of scatter in this game rather than two wilds, though the first type of scatter isn’t all that exciting, allowing you to form combinations that can add up to 100x your wager on top of other wins when you land the image of Raymond by his old truck. Captain Shockwaves’ super dog is much more interesting, however, because he activates the free spins. Land five and you can get as much as 30 free spins all with a huge 4x multiplier, which is enough to make anyone feel like a superhero!

We were pleasantly surprised by the Alpha Squad Origins Captain Shockwave slot game, which used clever imagery and a cute comic book theme to give it a different identity from the original and brought some generous mechanics into play to help generate some great prizes. The main game isn’t as lucrative as we like, but the great free spins round more than make up for it!

There are so many slots and themes that you can try, such as Kitty Cabana, Exotic Cats, Break Away and Lucha Legends.