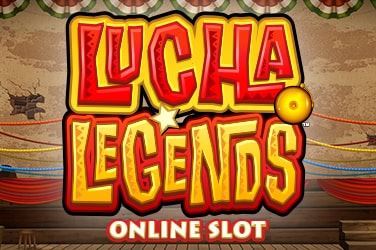 The Mexican tradition of wrestling by masked, muscular Luchadors is a perfect backdrop for slot games. They’re both big and bombastic, full of thrills, spills and emotion, with big wins and eternal glory on the line for anyone brave enough to step into the ring!

Luchadors are a popular subject for slot games these days, and Lucha Legends is a traditionally wacky and larger than life look at the sport. The graphics are cartoonish but high quality, and while the low value symbols are the standard 9 – A, the higher value symbols are all Lucha wrestlers in their pomp and finery, sporting flashy outfits and striking manly poses. The background is a wrestling ring ready for the fight, surrounded by posters and flags just like a real Luchador match. Traditionally zany Mexican music fills the air in the background, while puffs of smoke and streams of confetti burst onto the reels to celebrate successful combinations.

Lucha Legends is a pretty traditionally laid out slot, boasting five reels and three rows with 24 pay lines to play on, on which you can bet as much as £/€/$75 per spin. While the layout may be standard, the prizes definitely aren’t, and wins of up to 2200x your stake are possible in this game alongside a £/€/$165,000 potential prize pot for the top winners. On top of this is a Power Up mode that can be activated in order to access extra wilds and wilds with extra multipliers, boosting the number of wilds available to four and the multiplier available to a maximum of 5x in exchange for doubling your bet. The RTP remains pretty much unchanged despite the Power Up mode, maxing out at 96.38%.

The wilds are the most exciting symbol in Lucha Legends, divided into regular and super wilds, which can both perform the traditional job of substituting for other symbols or even give cool bonuses. Super wilds can do one of two extra things, one of which is to make two adjacent symbols wild where they land, while the other is to randomly gain a multiplier of up to 5x on whatever combo they help to complete. There is also a more traditional free spins round activated by landing three or more of the wrestling belt scatters, which grants you 10 free spins. If you’re lucky enough to land another two scatters you’ll get an extra free spin for every two you land, while three scatters will give you another 10 free spins.

The Lucha Legends slot game is a lot of fun to watch and play, and it’s easy to get caught up in the infectious excitement of the experience as you go. That’s even more tricky to avoid when you start landing those tasty wins, though this is a high volatility slot, so those may be few and far between. Just like the real thing however, Luchadors know that the greatest risks mean the greatest rewards, and this slot definitely rewards those bold enough to bet big!