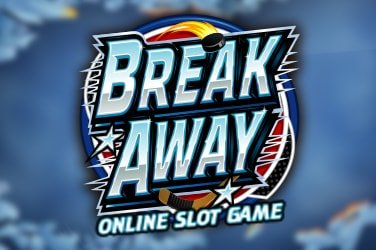 Brought to you by Microgaming, the Break Away Slot Game is an ice hockey themed slot with five reels, three rows and 243 ways to win. Combining the high energy game of hockey with high-quality graphics, the game is available to play across all devices thanks to the fully optimised design.

With a Return to Player (RTP) of 96.42%, the Break Away Slot Game is considered a medium volatility slot.

The Break Away Slot Game has a visually impressive design, with every aspect of ice hockey represented across the reels. The reels pretty much fill the entire screen, so there isn’t too much to report in terms of the backdrop – it’s a basic blue design. The animations and sound effects work together to provide a fully immersive gaming experience.

In terms of symbols, you’ll find players, sticks and skates, alongside flaming hockey pucks, ice cleaners, hockey rinks, masks and more. Each symbol is animated, and some even burst onto the reels, setting them alight.

The Break Away Slot Game’s minimum bet sits at a relatively high $/€/£0.50 per spin, with the highest possible wager set with the upper limit set at $/€/£50.00 per spin. High rollers should appreciate these stake options, but those who are new to the world of online slots might swerve this one due to the high minimum bet value.

Look out for the Break Away Slot Game’s logo, which acts as the wild within the game and can appear stacked on the second, third and fourth reels. It’s possible to have up to 40 of these stacked wilds across the reels at any time, resulting in plenty of chances to land significant winnings.

The opposing hockey players act as smashing wilds within the game. This will activate when two players appear on the second, third or fourth reels, resulting in a guaranteed winning combination.

Finally, there’s the fiery puck, which acts as the scatter and can only land on the second, third or fifth reels. When this happens, it’ll trigger the free spins feature where you’ll play up to 25 free spins across rolling reels. Expect a multitude of multipliers, plus added rolling wins worth up to ten times their usual payout value.

The Break Away Slot Game is an entertaining video slot that all sports and ice hockey fans will appreciate. The graphics are superb, and the added animations are excellent. The accompanying sound effects further enhance the theming, creating an immersive gameplay experience that makes you feel like you’re actually at a hockey game. In terms of features, the stacked and smashing wilds offer the chance to substantially boost your prize pot, particularly the latter as it offers guaranteed winning combinations. The free spins feature relatively easy to trigger, and the rolling wins and multipliers can quickly add up.