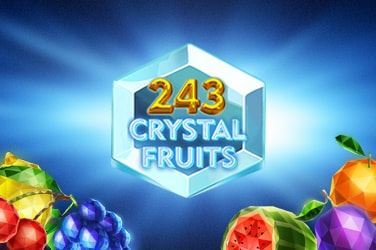 If you’re a fan of the old-style fruit machines then you’re in luck, because they’re back with a major upgrade. 243 Crystal Fruits has it all there in the title: It’s all the fruit symbols you’re used to, back with a good looking crystal redesign, and boasting an awesome 243 ways to win.

So is combining the simplicity of the fruit machine with up to date graphics and mechanics of a modern slot a sure-fire hit, or is it a dud? Let’s check it out in our 243 Crystal Fruits slot game review.

It may remind you of pub gaming machines and the casinos of yesteryear, but there’s no doubt that 243 Crystal Fruits is a game for the 21st century. The pumping electronic soundtrack and the curious, angular fruit designs are decidedly not traditional but they are great additions to the theme of the game, as are the cool animations that accompany spins and successful combinations. There’s a definite digital inspiration behind the style of this game: The crystal fruits look like wireframe models, while the glowing pixel animations that accompany wins are reminiscent of games like Tron. It goes without saying that the fruits in the game are familiar, with all your favourites on display, including cherries, lemons, watermelons and oranges among them. The good old lucky 7 also makes an appearance as the top paying symbol, while the game’s logo is the wild.

While the game’s design is interesting, by far the most noteworthy aspect for players is the mechanics. The setup for this game is as simple as it gets, with five reels and three rows enabling the use of five paylines. However, as the name implies, this game also employs a 243 ways to win element, meaning that symbols need only appear in adjacent reels anywhere on the rows for form winning combinations during the bonuses. The penny arcade roots of this game are on display in the betting limits, which range from just £/€/$0.05 to only £/€/$10, so while you may not win big in this game you’ll certainly win a lot. This is borne out in the game’s RTP, which sits above average at 96.6%, demonstrating that winning is very much on the cards even absent massive jackpots.

Much like traditional fruit machines, there is no specific bonus round in this game, so forget about scatters, though the 243 Crystal Fruits slot game does have a trick up its sleeve. In place of a bonus, the wild in this game awards a free spin every time it forms part of a winning combination. These free spins take place using a cascading reels mechanic rather than the traditional spin used in the main game, so successful combinations will be removed with other symbols falling to take their place. Each win the cascade creates increases the multiplier from the wins to a maximum of 5x, which is made easier by the fact that the bonus spins take place using a 243 ways to win mechanic, greatly increasing the likelihood of a successful combo.

While 243 Crystal Fruits is definitely a simple game, that doesn’t mean it has nothing new to offer. This game serves as a worthy update for fans of old-style fruit machines who want a little something new, paying homage to the easy playing style of the original while also adding new features to help you win more cash.

Looking for something a little different, you could consider these games Psycho Candies or Monster Wins.