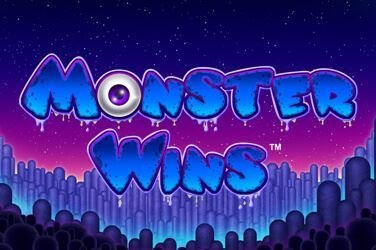 You might think that Monster Wins would be a Halloween game, but forget all the thoughts of haunted houses and things that go bump in the night, because you’re in for a double dose of cuteness with these guys!

These monsters are about as cute and cuddly as you can imagine, with smiles on their faces and love in their hearts, it’s impossible to find them scary, but do they have the cash you need to share their joy? Let’s take a look in our Monster Wins slot game review!

To tell the truth, we’re not sure if these guys are supposed to be monsters or aliens, because the starry sky and weird landscape in the background of the reels doesn’t exactly look like it’s on earth, but wherever it’s set these guys are having fun.

All the symbols are unique, and from the happy little munchkin monsters in a variety of shapes that make up the lower symbols, to the grown-up monsters who are the higher value symbols, they all seem to be enjoying themselves. There’s a happy soundtrack playing too, and joyful sound effects that play when you make winning combos. All in all, it’s about as far away from scary as you can be.

Monster Wins is slightly strange in its setup because it doesn’t have any pay lines, and while there are 1024 ways to win in this game this is achieved by placing a single bet on the whole set of reels and spinning to find out if you’ve won. This is much less complicated but can feel like you have less control. Monster Wins definitely places the emphasis on quantity when it comes to the types of win you can achieve because most of the symbols in this game aren’t worth a lot, but you’ll win much more frequently than in other games too, so it really depends on your personal preferences.

In Monster Wins slot game there is one symbol that beats all the others hands down, and that you’re going to want to watch out for: The giant, blue monster boss. This big blue guy is the key to all the best wins in this game, so if you want to get anything like the 97.1% RTP it promises you’ll need to hit him a lot!

The boss monster appears in two ways. Firstly, you can just land him naturally on the reels. He’s unmistakable: a blue square with five eyes like a domino, but he stacks four high to take over the reels wherever he lands. If you manage to land him on the far left reel then the magic happens, and he’ll reach out and place copies of himself on one or two of the other reels so he’s stacked on them all. This gives you a spin with two or three stacked wilds, which is sure to be a money-spinner! The bonus round is very similar, activated by landing three of the bonus symbols, and all this really does is activate the boss monster automatically on the first reel. The difference is that this time he’s sticky, so he will stay stacked on the reels he lands on for your whole batch of free spins, potentially winning a fortune.

These are the cutest, fluffiest monsters you’ll ever meet, but don’t underestimate them! While the Monster Wins slot game may be bouncy and happy, that doesn’t mean there aren’t some pretty amazing wins to be had underneath the surface. The key to the whole game is the monster boss because the regular symbols don’t pay well but land a few of him and you’re golden!