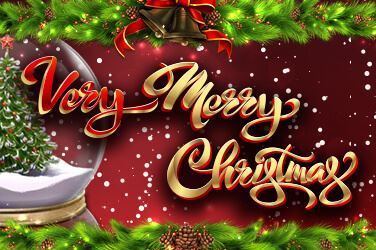 Christmas slots are an acquired taste and games developers can take a risk in coming up with a festive-themed game as player interest can wane outside of the traditional festive period, but Very Merry Christmas by Eyecon is good enough to be played all year round.

Eyecon, which started off in the late 1990s as a video game maker, has built up a strong reputation for the quality of its slots games since it shifted its focus to the online casino market in 1999. They are currently based in both Alderney and Australia and produce a variety of casino slot games that are enjoyed by players all over the world.

You may not be feeling very festive now, but even if Christmas isn’t on the horizon, there’s a good chance that Very Merry Christmas will put you in the holiday mood! This is a conventional-looking five-reel, 25-payline game, offering play in the range of $/€/£0.25 to $/€/£12.50 and has a host of bonuses and features to boost your potential winnings.

Some Christmas-focused slots can overdo the festive spirit, but this is an example of the principle that less is more. The layout is clear and understated and the reels are based on a traditional toy theme, with a woody-feel and a selection of famous Christmas toys from years gone by. On these reels, you can find blocks, rattles, teddy bears, cars, trains and planes, while the top of the tree when it comes to rewarding icons is the wooden rocking horse, a tile that can land up you to 1,000 coins.

Another charming feature is the presence of the letters M E R and Y. These icons spin around the reels and if you can bring them up in a combination from left to right, you could land a prize of 3,000 coins. There is also a pretty snow globe, which serves as the game’s Wild. This lands only on the second and fourth reel, but if it makes a winning combination, you can grab a double payout.

Very Merry Christmas is a high volatility game with an unspectacular 95.04% RTP, but it offers some player-friendly bonus features that will be appreciated by the modern gamer.

First up is the Match and Win bonus. This is triggered when you bring up three or more Red Gift Box icons at any point on the reels. This launches the bonus game, which gives you the chance to choose from a choice of globes until you find two that match, which will represent your prize.

The other great bonus feature is the Prize Pick. To launch this bonus, you must line up a sequence of three Green Gift Boxes. Once the game is launched, you will have another choice of snow globes, but this time, each globe provides a multiplier worth up to 100x your stake or an alternative reward of ten free spins. And, if you track down the free spins, all payouts during those spins will be doubled.

Christmas games aren’t for everyone, but Eyecon has done well to find a new take on this traditional theme and the result is an entertaining and engaging festive slot.