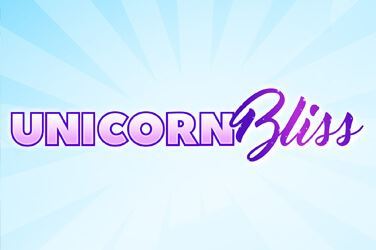 The world of online slots can be quite a masculine one, so it’s nice to see a slot that’s got softer edges to it. Unicorn Bliss is about as far from cool and edgy as you can imagine, full of rainbows, bright colours, flowers and birds, and whether or not you’ll enjoy it will depend on how you reacted to that last sentence. However, colourful doesn’t mean cheap, and there are some serious prizes on offer if you can stomach the cuteness.

So is this game a delight or a disaster? Let’s take a look in our Unicorn Bliss slot game review.

You can’t fail to crack a smile when you see the artwork of Unicorn Bliss, and if you’re in a bad mood this can be the perfect antidote, with plenty of bright colours and cutesy symbols. All of the symbols are unique, and among them, you can see a dewy rose, flowers of different colours, hearts, birds, suns, moons and stars. The graphics aren’t fantastic, but that’s in keeping with the cartoonish style the game uses, and while some may find the relentless cheer to be found in this game off-putting, you can’t deny that it’s infectious. The background is, of course, a huge rainbow against a blue sky, though there isn’t a soundtrack to back up the visuals.

The simplistic theme goes nicely with the straightforward gameplay, and there’s nothing controversial in the basics of Unicorn Bliss, with five reels, three rows and 25 paylines in what is a fairly traditional setup. There’s a rainbow wild and a unicorn scatter to play with, the first of which substitutes for other symbols and the second of which activates the bonus game, though it’s not a great option for high rollers. The maximum bet is £/$/€12.50, so you’ll need to be persistent if you want to make a lot of cash, a fact that’s confirmed by the relatively low RTP of 94.9%. Having said that, when you do win, the payouts can be very tasty: Even the lowest payer awards 50x your stake when you land five, while five of the heart symbol pays 2400x your stake, plus there are the bonuses to factor in.

The first bonus round in the Unicorn Bliss slot game is a fairly standard free spins round that is activated by landing between three and five of the scatters, which gives you a maximum of 25 free spins. That’s it for extra stuff in the free spins, though you can reactivate the free spins as much as 15 times, which can add up to an awful lot. While this is the only bonus round, there is also a gamble feature which allows you to double your winnings from the bonus round if you can guess the colour of a drawn card. It’s a risk, but it can seriously boost your winnings if you get it right.

Unicorn Bliss is cute, almost sickeningly so, but if you like this theme or you can tolerate it, there are also riches to be had. The payouts are generous, and while the bonus rounds are a bit limited, there are at least lots of chances for you to bag extra spins and boost your cash prize.

Unlike unicorns, great slots on our site are easy to find. You’ll find excellent titles such as 99 Time Jackpot, Champions of Valhalla Jackpot and Lucha Rumble Jackpot.