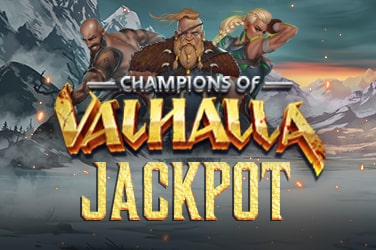 Here in this Champions Of Valhalla Jackpot Slot Game Review, we want players to be fully prepared before they deposit any funds and get the reels spinning.

That is why we will cover the following important information; the general gameplay of this slot, what the RTP (return to player) rate is, and if the Champions Of Valhalla Jackpot Jackpot Bonuses will help you earn some top prizes.

Eyecon has a solid reputation for producing entertaining and engaging online slots, and this one is no different. There are many games out there that have gone down the Viking/Norse God route as a theme, but we feel this one stands out from the crowd, thanks to its excellent design (the background, characters and symbols have been well drawn) and enjoyable gameplay.

Champions Of Valhalla Jackpot is a traditional slot game, with three rows and five reels and there are 25 paylines in total, whilst players will need to decide how much they wish to bet for each turn. The minimum bet is $/€/£0.25, with the maximum stake being $/€/£12.50. The aim is to land between three and five of the same symbol on the reels, to trigger a winning payout.

The symbols are also in keeping with the Norse God theme. Each symbol has been assigned a different value, meaning matching symbols can result in a variety of payouts. The lower value symbols are a helmet, crossed swords and Mjölnir (Thor’s Hammer). The payout for these symbols range from between x5 and x10 if you land three, up to 50x and 75x if you land all five.

From there the symbols which have a higher value are the axe, the Viking’s ship and the two viking characters (worth between x15 and 50x for landing three, while landing five is worth up to an impressive x500 of the original stake).

The block of wilds feature begins when the rune symbol lands on the third wheel. Then, it will convert either three, six or nine symbols into feature wilds, which will vastly increase the chance of having a winning combination.

Eyecon has done it again and created a great game. The Champions Of Valhalla Jackpot Bonuses will keep players coming back for more, as they truly do give bettors the chance to secure some serious winnings.