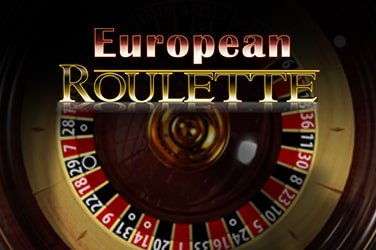 Genii, the makers of this game, have always boasted of their modern and forward-thinking approach to developing online games, and that’s exactly what you get with The European Roulette. It’s clearly a game that has been optimised for mobile and modern computers, and there is a lot more movement than you might expect for a casino game that is relatively static, making use of the latest gaming capabilities.

It’s a fast and furious approach to roulette that fits the mobile gaming genre perfectly, but will you give it a spin or is it too far off the rails? Let’s take a look.

As the title suggests, this version of the classic casino game is the European variant, which means some minor rule differences that American players may notice, but beyond that, there is all the casino magic that players will know and love. As with all Genii games, it looks great, and they make great use of movement in the game to bring it to life. The static board and wheel that you see in most roulette games are gone, and instead, they move on the screen and overlay themselves on top of each other when they come into play, meaning the screen can be much larger and less cluttered, with relevant parts of the table only appearing when they’re needed. The table and the wheel itself look great too, realistic but with nice vibrant colours to bring it to life.

Ease of use is the primary driving force behind the game, and while it can look confusing and complicated to new players, there is a system in place to explain to players what each combination of bets will payout so you know exactly what you’re doing. As a result, this game is a lot faster than most roulette games you’ll have played because it’s so quick and easy to place bets, which might be a problem for purists or new players, but regular gamers will love it. Betting is as easy as putting your tokens on your favourite colour and hoping the ball lands on it, but more advanced players will make inside and outside bets. Quickly explained, inside bets are ones made on the exact numbers and colours in the grid on the table. Outside bets are ones made on anything else in the game, like colour or odds and evens. Inside bets are riskier but pay up to 35:1, whereas outside bets are safer but only pay up to 2:1. As with all roulette games, the RTP is 97.3%.

While it doesn’t have any bonus rounds as you’d find in slots games, this version of European roulette leans heavily into its French heritage and offers a few pre-set special bets that you’d have to know about in advance if you were playing at a casino. Voisins du Zero, Tiers du Cylindre and Orphelins are famous betting patterns that can secure big wins, and they’re made easy to achieve through pre-sets in this game. A nice touch that adds flavour, and possibly prizes too!

A fast-paced version of this classic offers players unique bet options that could lead to bigger wins.

If you fancy playing some other titles by Genii, you could consider Roll Up Roll Up, Road Trip Max Ways, Reels of Rock or Reef Encounter.