Home » Genii » Roll Up Roll Up

Roll Up Roll Up Slot Game 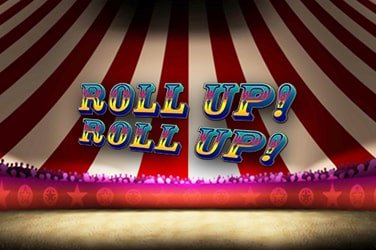 Roll Up Roll Up has all the loveable icons of a day at the circus, but will you be the one having the last laugh when you pocket a tidy win? We certainly hope so.

Roll Up Roll Up is housed on a fairly standard 5×3 playboard featuring a myriad of typical circus symbols, such as performing monkeys and seals, ticket stubs, refreshments and much more. Like many other games on the market the game takes up a coin format rather than straight-up cash, with a minimum bet of 1 coin, going through to 90, and there is the option to change the denomination of your coins, so all playing stakes should be accounted for.

We usually recommend a Returns To Player (RTP) percentage of at least 95% to ensure playing budgets last a decent chunk of time and we’re happy to report a 96% RTP on Roll Up Roll Up. For anyone that doesn’t know what that means, you should typically get back $/€/£96 for every $/€/£100 wagered, although there is some leeway on either side to account for big wins and prize droughts.

Roll Up Roll Up may only have nine paylines but thanks to it’s decent RTP you should feel fairly confident that you can line up at least three matching symbols. If I can, you can too! Popcorn and ticket stubs carry the smallest prizes, while the lion tamers, tigers and elephants hold the biggest regulations wins.

Visually speaking, Roll Up Roll Up is a decent concept that could be even better if the renderings were of a slightly higher quality. I’m not saying they are badly crafted, but we’re a spoiled bunch these days and high-end renderings should be a minimum requirement. The soundtrack, though, is very fun and does have a very nostalgic feel.

There is a very decent free spins feature on Roll Up Roll Up that can provide players with a whopping 40 free rounds if you manage to land five scatter symbols in a single spin. There’s also a fun instant win feature on the game’s Balloon Pop side game where a clown is being propped up by several balloons with cash prizes inside each one. You pick a balloon to pop, and whatever prize is behind it is yours!

Roll Up Roll Up is a very tidy slot game that should be popular amongst players thanks to its fun, throwback concept that should have punters reminiscing about simpler times with family and friends. The game plays well and knits together nicely, while a very respectable RTP and modest volatility should take some of the stress that can go hand-in-hand with long, grinding slot sessions. The visuals are perhaps a bit rough around the edges, but overall, developers Saucify should be pleased with their work. A job well done!