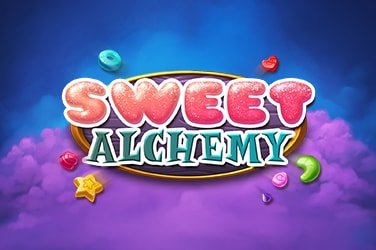 If you have a sweet tooth and a taste for excitement, then this high volatility sugar rush is definitely the game for you! Sweet Alchemy by Play N Go combines all of the most exciting mechanics from modern slots into one place, guaranteeing thrills and spills as your wins mount on top of one another to activate bonus rounds, multipliers and free spins galore.

Help the alchemist mix up the perfect batch of candies to win the top prizes, and claim up to 3,000x your stake in one spin. So is this game a sweet treat or a sugar crash? Let’s take a look in our Sweet Alchemy review.

Bright colours and inviting treats are the order of the day in this slot, and there isn’t a square inch of the screen that isn’t filled with gaudy pastel tones. The symbols here represented by a wide variety of colourful sweets payout in cash rather than multipliers of your stake, with seven green jelly beans paying £/€/$10 while four polo mints nets you £/€/$0.50 at the other end of the scale. All of the symbols look good enough to eat, and the cartoonish design is nevertheless professional and easy on the eye. The whole screen is alive with animations too, when you make combos or activate bonuses, while the alchemist with her cauldron on the right reacts appropriately to your game.

The Sweet Alchemy slot game is played using a cascading reels mechanic, so when the round starts you are challenged to match symbols in clusters of at least your, which causes that cluster to explode and more symbols to tumble down and take their place. It’s fast-paced and exciting with wins coming thick and fast, and with bets from £/€/$0.10 to £/€/$100 and an RTP of 96.5%, there are lots of chances for you to win big with a well-timed wager.

As with other games of its type, the big wins are to be had in the bonus rounds. The bonuses are progressive, so you’ll move up through the levels and get access to better symbols and better bonuses as you go. Complete six combos to reach round two to gain two regular wilds, which just boosts your score like a normal wild. Completing 13 combos grants you two striped wilds, which remove a line of symbols when part of a win. 25 combos grant you two dotted wilds, which removes every example of a randomly chosen symbol from the reels. 38 combos open the bonus game Mix the Elixr, granting seven candy spells cast by the alchemist, which affect the game in surprising and profitable ways.

Mix the Elixr expands the grid to 9×9 size, and the candy spells effectively act as your free spins in a normal game. After the first round has played out the first candy spell will activate and will grant one random effect of three: shuffling the grid around to create combos, adding 7 to 12 new symbols or destroying 7 to 15 random symbols. When no more combos can be created the grid resets and a new round starts with the second of the seven spells, and so on until no spells remain. Another bonus round also exists, challenging you to collect specified combinations of symbols identified at the bottom right of the screen.

Each time you complete one of the challenges during the bonus round you are presented with a grid of chocolate squares to choose from, with each choice flipping the tile to reveal a symbol. Match three symbols to win a prize at each level to a maximum of 10x your stake and the total wins in the bonus round. Winning all three stages also moves you along a treasure map to a chest that always contains an extra 15% of your total winnings in the last bonus round.

Phew! That’s a lot of bonus content, and it’s easy to see how exciting and rewarding it can be to get those wins, fill up the meters and activate ever newer and more challenging bonus rounds. There are few games out there as generous with their bonuses and multipliers, but beware, your overall prize depends heavily on how you do in these rounds which is very variable. Lovers of high variance slots will be in heaven!