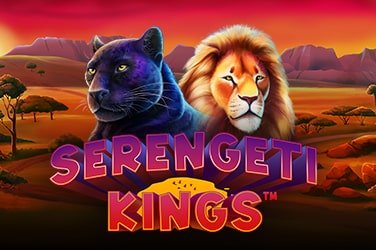 Serengeti Kings is a new safari-themed casino slot by popular developer NetEnt, released in 2020, and themed around two Kings of the Serengeti: the panther and the lion. This is a unique slot which features an interesting mechanic, where players alternate sets of 12 spins, effectively playing two slightly different slots.

There are tons of features on offer in Serengeti Kings, with players able to win free spins, buy scatter symbols, and enjoy multipliers and wilds aplenty thanks to the game’s lion and panther symbols.

In Serengeti Kings, players alternate playing 12 games on the lion reels, collecting lion symbols as they go, and 12 spins on the panther reels, collecting panther symbols. When it’s time for the 12th spin on each reel set, the lion or panther symbols that players have collected will be laid over the reels, forming unique combinations which can result in more wild symbols and even added multipliers.

At its heart, Serengeti Kings is a basic payline slot with 26 lines in play. The lion and panther symbols themselves are the most valuable base symbols in the game, each paying out between 1x and 5x the bet for between three and five symbols on a line. Basic 10-A symbols payout just 0.3x to 1x the bet for three to five symbols.

There are a couple of bonus features at play in Serengeti Kings. The first is the lion and panther reels which the entire game is based on. During 11 lion spins, players collect all lion symbols which land on the reels, and on the 12th spin, these are spread across the reels. Depending on what they overlay, these symbols can transform into new ones: a lion on top of a panther makes a wild, whereas a lion on top of another lion makes a lion symbol with a multiplier. The same happens again during the panther reels.

Serengeti Kings offers an average return to player of 96.7%, which is above average for a slot of this type and means players have a decent chance of making some money back on their spins. It’s a medium-high variance game though, which means players should be prepared to spin for a while before making much back.

Serengeti Kings is a really interesting new slot from NetEnt which offers both a unique game mechanic and a decent RTP. This slot looks set to be one of NetEnt’s most popular, and players should definitely give it a shot.