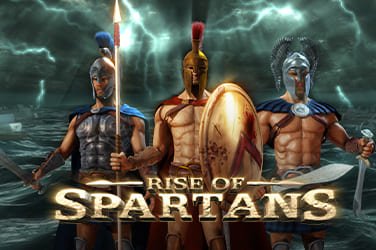 There’s a feeling of destiny in the air when you play slot games, hoping that each and every spin will bring you the fortune that you were born to have, so it’s no surprise we tend to get lots of epic themes in slot games like Rise of Spartans.

This very serious looking slot from Saucify covers the Persian Wars, one of the most decisive conflicts in ancient history that still shapes the world today, but will you live forever as an immortal or are you destined to be forgotten? Let’s find out in our Rise of Spartans review.

There’s nothing lighthearted about the tone of this slot, which plays the fight for survival between the Greek forces and the Persian invaders as straight as an arrow. The background to this slot is a grainy rock wall so that it looks like the reels are embedded in the stone, perhaps a reference to the rocky mountain pass the battle of Thermopylae was fought over? Regardless, the rest of the symbols are similarly epic, with the low-value icons represented by various patterned shields and the high-value symbols represented by various heroes and villains of the wars: King Xerxes, Themistocles, Queen Gorgo and Artemisia. Urgent battle music plays in the background, while triumphant shouts and other sound effects accompany your wins, along with little animations in each winning symbol.

Rise of Spartans is fairly traditional in the way that it is laid out, using five reels and three rows with 15 pay lines to play on. The individual symbols are fairly valuable, with the Themistocles wild being particularly high paying at 8000x your stake and doubling the value of any combo he lands in, while the next highest paying image is the Spartan warrior who pays 1000x your stake when you land five. The RTP in this game sits at a very average 96%, so while the main game isn’t bad in terms of compensation, you’ll need to do well in the bonus rounds to get really rich. Luckily there are a few of those to enjoy!

There are a few bonuses at play in this game, and there are actually two scatters, one of which has a bonus game associated with it and one of which doesn’t. The Queen Gorgo scatter simply pays 200x your stake for five no matter where they land on the reels, while the Artemisia scatter also activates up to 15 free spins, during which her arrow will turn random symbols into the wildfire symbol that completes combos and doubles the value of any win they’re part of. A third bonus involves the King Xerxes symbol, and landing three of him will grant you access to the golden pools pick and win feature. In this game, you’ll get to pick from a number of golden pools to find out what prize is inside, with the number of pools and picks determined by how many Xerxes symbols you landed. Three symbols equal one pick from three pools while five symbols equal three picks from five.

The Rise of Spartans slot game is a rip-roaring ride through one of the most exciting conflicts in history, and this game never lets you forget what’s at stake. Grim-faced warriors, epic battle scenes and exciting animations capture the theme, while some fun mini-games and epic win potential mean you’ll be on the edge of your seat for every spin.

If you can conquer slots, why not think about playing Retro Reels Diamond Glitz, Forbidden Throne and Aquatic Treasures.