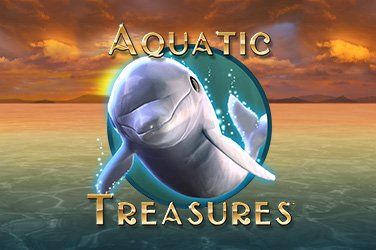 A certain singing crab once convinced us that life was much better under the sea, and we can’t say we’ve changed our minds based on Aquatic Treasures, a slot that demonstrates how peaceful and how lucrative it can be hanging out beneath the waves.

Friendly sea critters of all kinds bring you gems and precious jewels as you spin the reels, and there’s not even so much as an errant shark to upset you on your quest for even more of that undersea gold. But is the prize worth the voyage, or will you end up feeling like a drip? Let’s find out in our Aquatic Treasures review.

The Aquatic Treasures slot game is certainly atmospheric, and you can’t help but be a little hypnotized by the shimmering half-light under the water that forms the background to the reels, as shoals of fish, turtles and stingray drift by in the shadows. The graphics and the animations in this game are certainly superb, using 3D to bring the ocean to life without blinding you with noise and action as dolphins flip and play on the reels while other symbols glow and spin. There are even various seaside sound effects to accompany the action, which is nice, while the symbols include the generic 9 – A as well as glowing coloured gems.

Aquatic Treasures isn’t exactly going to knock your socks off with the action, and we’re happy to categorise this as one of those more relaxing games that you play on a break from a real money maker. That’s not to say it’s not fun to play, but there’s no danger of you losing it all or making a million either. Your highest paying symbol is the purple gem that rakes in 7.5x your wager, which isn’t much even at the maximum bet of £/€/$100 per spin, but we found that wins occur as much as one in every two or three spins, so you’ll be hitting those combos regularly. That explains the nice and average RTP of 96.03%, typical for a low volatility slot like this one.

We were happy to find that the feature selection is actually pretty good in Aquatic Treasures, and our favourite of these is the wild, which expands to cover the whole reel with a dolphin when it lands on reels 2, 3 or 4. It also clatters and splashes about when it does this, which is charming and can combine with an adjacent wild to form an even bigger wild that allows for bigger wins. Alongside these fun wilds is a fairly typical free spins feature that is activated by landing three to five of the dolphin jewel scatters, pearls encircled by a pair of golden dolphins. Five of these can give you up to 8 free spins as well as a maximum payout of 25x your wager, alongside extra wilds that are added to the reels as you spin. You also get a fun animation of a dolphin bursting out of the water with a sunset behind, which is a cool effect.

Aquatic Treasures isn’t exactly a slot designed to get your pulse racing, but not everything has to be designed around a five-year-old with too much sugar, and we like a change of pace every now and then. The graphics look gorgeous and the theme really works, while some fun bonuses and some potentially decent payouts mean you can still walk away with a healthy bank balance as well.