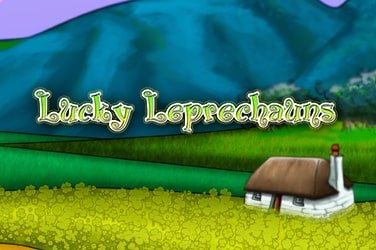 Casino77 players who have the luck of the Irish will want to check out this Lucky Leprechauns slot game review as they can earn themselves wins of 100x the bet and a number of free spins!

Ireland is a highly popular source of inspiration for many game developers as much of the country’s culture could be considered to provide people with an element of luck, which is perhaps why they have become so popular.

Of course, when a game is called ‘Lucky Leprechauns’, it did not come as a surprise when doing this Lucky Leprechauns review that there would be a sense of overload by the use of the traditional Irish themes when checking out what Genii have to offer.

Players will be blown away by the colours that have been used, with each of them being incredibly bright and vibrant, with each of them radiating off of the screen. The game’s background features a traditional Irish setting, as there are green fields and a sky that features a cloud and a rainbow.

The playing grid also emits a sense of familiarity, as there are a total of 5 reels and 3 rows available for symbols to fall and appear on, whilst a minimum bet of $/€/£0.01 can be used due to the adjustable 40 paylines that are available. The maximum bet available, though, is a nice $/€/£100 per spin.

As mentioned in this Lucky Leprechauns slot review already, the symbols feature some rather powerful and vibrant colourings, with each icon having been given some attention in the graphics department.

Icons that have been made available in this Genii title include the traditional playing card icons, although these are then followed by a horse shoe, an emerald-encrusted ring, a four-leaf clover, a pot of gold, as well as some special icons that can trigger the great Lucky Leprechauns bonus features.

With a couple of great Lucky Leprechauns bonuses available to players at Casino77 when they spin the reels of this game, those betting on the playing grid will be able to potentially win some rather nice and lucrative rewards.

The first is via the rainbow icon that can be found, as this is one of the Lucky Leprechauns slot game scatter icons. Our Lucky Leprechauns review team found that the prizes attached to these icons will depend on the bet being placed, with players able to land up to 100x the spin cost when 5 appear!

Players will also be able to note that there is a harp icon which is also a game’s scatter, however this will trigger the top Lucky Leprechauns bonus feature possible; the free spins game! Players who land 3 or more of these will be rewarded handsomely, as 3 will provide 5 free spins, whereas 4 will provide 10 and 5 will hand out 15 free spins.

In addition, all wins that are obtained in this Lucky Leprechauns bonus will be tripled in value, as well.

There are a number of random wilds that can appear, although this Lucky Leprechaun Slot game review found that these do not appear in the free spins game.

A return to player (RTP) rate of 94.10% has been provided with this Lucky Leprechauns slot game from Genii.

With some top quality Lucky Leprechauns bonuses available to utilise such as the free spins game and the win potential via the use of a multiplier, Casino77 bettors will want to give this game a go as they could become as rich as leprechauns are supposedly thought to be!