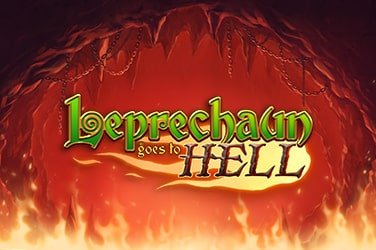 If you’re usually a fan of cute leprechaun themed slot games then you should look away now, because this is a leprechaun as you’ve never seen him before. You might think that going to hell might be a bad move for such a happy, jolly little fellow, but he seems right at home in this cheeky, goth-inspired slot.

All the usual elements you’d expect from a leprechaun slot have been turned upside down and given heavy metal makeovers, but is this slot a pot of gold or is there nothing at the end of the rainbow? Let’s find out in our Leprechaun Goes To Hell slot game review.

You can probably close your eyes and picture a typical leprechaun themed game right now: The green, gently rolling hills of Ireland, shamrocks dancing across the screen, pots of gold and rainbows as far as the eye can see. Well, forget all that, because instead, we’ve got scorching flames in the background, steaming flasks of poison, top hats made of bones, golden pitchforks and pentagrams as the high-value symbols instead. The generic 9 – A make up the lower value symbols, but even these have been given a heavy metal makeover and are steely grey rather than the usual gold. Fire is a bit of a running theme here as you might expect, and it flickers and licks across the screen as you make combos too. This is all accompanied by some appropriate ‘wooshing’ and crackling sound effects, but it would have been nice to have some music too.

There’s nothing shocking about the mechanics, which make use of five reels, three rows and 25 paylines to give you a shot at the money. With bets running from £/$/€0.25 to just £/$/€5 this probably isn’t the best slot for high rollers, but that’s not to say that there isn’t any money in it, thanks to a couple of potential bonuses and a whopping progressive jackpot on the cards too.

The two main symbols to watch out for in this game are the wild and the scatter, represented by the leprechaun and the buxom lady demon who appears on the reels. The wild behaves typically, substituting for other symbols to help you complete combos, while the scatter activates the bonus rounds. So far so typical, but if these two appear anywhere on the reels together, your wins from that spin are automatically doubled.

You can also do quite nicely out of the bonus round, which transports you into some kind of hellish engine room, where our leprechaun friend shovels coal into a steaming brass boiler. Three demon scatters grants you 10 free spins, and with each winning spin, the leprechaun feeds the boiler, increasing the temperature gauge and getting you closer to the four card suits marked on the thermometer. For each one, you pass you win a progressive jackpot, with the top prize being in excess of x50000 your stake. That’s probably why the RTP is a generous 96.54%

The Leprechaun Goes To Hell slot game is the latest in a line of Leprechaun Goes To… games that have seen the jolly little fellow travel the world, and we think this is his best adventure yet. The theme is funny and engaging, with well-designed graphics and an amusing concept, while the bonus rounds are fun and rewarding with potentially massive jackpots on offer.