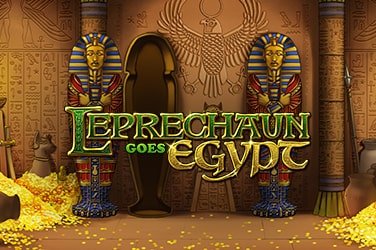 There have been some long awaited collaborations over the years, sometimes it takes two superstars coming together to make a true classic.

Irish slots and Egyptian slots are two of the most iconic themes in the history of slot games, so with Leprechaun Goes Egypt comes a fusion of these two titans of the genre that just has to be played. But is this a silly gimmick destined for the dustbin, or is it a stroke of genius? Let’s take a look in our Leprechaun Goes Egypt Slot review.

It looks like our friend the Leprechaun has been busy, and far from restricting himself from causing mischief in his Irish home, he’s taken a trip abroad to bring chaos to the land of the Kings! Leprechaun Goes Egypt is exactly what it sounds like, a take on the classic Egyptian slot that’s been taken over by all your favourite symbols from Irish themed slots! There are elements from both genres here as well as a few that are a mash-up of both, and while the low value symbols are Celtic styled 9 – A images, the background is a truly Egyptian scene of sand and pyramids, though with four leafed clovers growing implausibly everywhere! Other symbols include Mummies, Cleopatra, Pyramids, the Leprechaun, the Sphinx and the Scarab, though all these have been given little Irish touches too.

The Leprechaun Goes Egypt slot game largely saves its surprises for the bonus rounds, with the main game kept pretty traditional with five reels and three rows, while there are 20 pay lines to play on with a betting limit of £/€/$100 per spin. None of the prizes are that massive and this slot feels like a bit of a slow burner, with the maximum available in the main game coming in at 150x your wager, but that doesn’t mean there isn’t cash to be won, and you can see the high RTP of 96.75% as proof! If that’s not enough though, check out what the bonuses have in store!

There are a few cool little options in the bonus rounds that help raise this game’s fortunes quite a bit, the main one being a traditional free spins game with a twist. Land three or more Cleopatra scatters and you’ll get the choice between five free spins with a 6x multiplier, ten with a 3x multiplier and 15 with a 2x multiplier. Next up, you can land three of the Pyramid scatters to play a pick and win game that has you choose from various doors in the tomb to find cash and rescue poor Cleo. Pick the wrong door, and a scary mummy appears to send you packing! There’s even a gamble feature that allows you to double your winnings up to a maximum of 2500x your wager by guessing the colour of the next card!

We thought that Leprechaun Goes Egypt might just be a silly gimmick, and while the main game didn’t exactly reassure us, we were impressed by the funny and clever bonus rounds that also happened to hide the biggest payouts on top. A worthy mash-up of the two most popular genres!