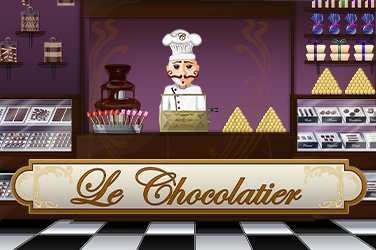 Le Chocolatier will see you now, and he’s cooking up a huge batch of delightful treats in his chocolate shop that will make your mouth water! If you ever doubted that there was an art to making chocolate then let this slot disprove that myth immediately because there’s no doubt that Le Chocolatier is a master at his craft, but alongside all the dainty morsels and delicious treats is there also room for you to make a bit of cash too?

The food takes centre stage in this slot, and it might be difficult for some players to control themselves around such lovely looking sweeties! Le Chocolatier is set inside a chocolate shop, and behind the reels, you can see all the accoutrements of a thriving little business, including a chocolate fountain, the till, a range of other treats and the chocolatier himself, but the main focus is obviously on the main products. The reels are filled with yummy looking delights, and for once we can’t even complain that the low-value symbols are the standard 9 – A, because they’re so well disguised as bars of chocolate and chocolate garnishes that you might not even notice what they are! The higher value symbols are the fancier treats, which include walnut whips, chocolate clams and a variety of truffles including caramel and strawberry.

Le Chocolatier is a very conventional slot underneath that shiny gold wrapper, and from the five-reel and three-row layout to the 50 pay lines that you’ll be able to play on, there isn’t much in the way of surprises to throw a spanner in the works. The maximum bet is pretty reasonable but not high enough to get excited about, coming in at £/€/$62 per spin, but the prizes are actually pretty decent. The chocolate heart pays best at 1500x your bet for five, while the chocolate clam offers 800x your bet, but the prizes drop off pretty quickly in the lower value symbols and even if you land fewer than the maximum number of high-value symbols. Thankfully the wild makes up for this, granting you a massive 8,000x your stake for the golden luxury cake! All in all, that adds up to an RTP of 95.41%

On top of all of these lovely treats, Le Chocolatier slot game also has some lovely bonuses to give out that will have your mouth watering. There are two wilds in this game as well as a scatter, which can award as many as 30 free spins if you land five of them on the reels, during which time all of your wins will be doubled. The second scatter is the chocolate bonus symbol which opens up a third game, which is a pick and win style round. During this game the number of symbols you can pick from increases as the number of symbols you landed to start the game increases, so if you landed five scatters you get to pick three of five rather than three from three.

Le Chocolatier is a sweet looking game with some lovely surprises in the centre that will satisfy your stomach and your wallet. Not only are there some great prizes to enjoy in the main game, but that generosity continues into the bonuses where there are three great chances to fill your boots and walk away with loads of cash!

Do you want to try some other sweet titles from Genii? We think these will be a real treat Bonus Deuces Wild Poker and Double Double Bonus Poker.