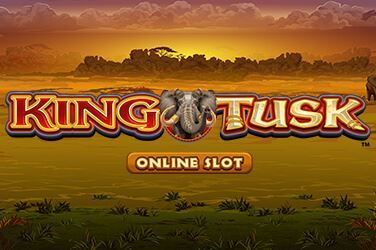 Move over Mr Lion! The savannah has a new king, and he’s the biggest and best animal south of the Sahara! Say hello to King Tusk and his elephant friends, as they help you win truly royal amounts of cash in this nature-inspired romp in the veldt.

With good looking design and a few interesting mechanics to keep you interested, King Tusk is a game that’s perfect for animal lovers, and not a bad idea if you happen to like winning money as well. So is this a royal rumble or a dog’s dinner? Let’s take a look in our King Tusk review.

It’s clear that animals are the focus of this slot, and we’re not just talking about the eponymous elephants. Every symbol is crawling with critters, and even the generic low value 9 – A symbol has lizards, snakes and dung beetles making their home among them. It’s a detailed, well-designed slot that takes inspiration from local African art, so from the reels themselves to the parched savannah background, it does a really good job of grounding you in Africa. As for the high-value symbols, it’s probably not a massive surprise that elephants feature strongly, so watch out for a family of pachyderms frolicking in the water, a pair of friendly elephants joining trunks and a pot of gold and gems featuring an elephant inspired motif. King Tusk himself makes an appearance as the wild, which substitutes for other symbols and can expand to cover the whole reel, while the King Tusk logo represents the scatter.

In terms of the maths behind the game, there’s not a huge amount to get excited about in King Tusk. The betting range stretches from £/€/$0.25 to a maximum of £/€/$62.50, which is a bit high for low ballers but not nearly high enough for high rollers, while the maximum win without multipliers is around 1,000x your bet. A decent amount of cash by any stretch, but a little on the low side compared with many slots. This all adds up to a decent RTP of 96.43%, perhaps a little above average.

Things do pick up again in the bonus round, launched in familiar fashion by collecting three King Tusk scatters on the reels in one spin. At this point, you get to choose from three different bonus games: Elephant Dance, Elephant Stampede and Elephants Gone Wild. Elephant Dance adds a random wild to each free spin, Elephant Stampede features a herd of elephants rushing down the reels in each free spin and making two random reels wild, while Elephants Gone Wild makes every high-value symbol wild. Obviously, there are positives and negatives to each game, so it’s up to you to decide which gives you the best chance of winning big. Each game starts with 10 free spins, which can be upgraded with another 10 if you land the scatters again in the game.

If you love elephants, love animals or love Africa then this is definitely a game you should check out. The King Tusk slot game is very well themed, with great graphics and charming animations really bringing the safari experience to life, though in terms of prizes and actual gameplay it’s a little flat. It’s the theme that really sets this game apart, but if you’re into elephants and wild animals then you’ll definitely enjoy playing.