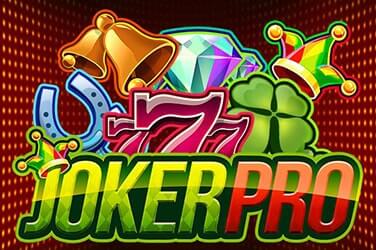 The Joker Pro slot game is one that has been brought to us by the Net Entertainment team. The game was released in February 2017 so it is one of their newer offerings and that is certainly reflected in the make up of it.

There is a real techno approach to the Joker Pro game with striking graphics which include sparkling lights behind the reels. The game also has an uplifting soundtrack and can be played across all desktop, mobile and tablet devices.

There is something of a futuristic feel to the Joker Pro slot game. It is very modern both in the graphics and the theme. The video slot has five reels and 10 paylines so there are plenty of ways to win.

The symbols used for the Joker Pro slot game are different to the usual ones that we see. The lower value icons include what we might see on a classic fruit machine including bells, bars, diamonds and red 7s while there are also horseshoes and four-leaf clovers. It is the diamond which is the highest value of those icons. You can win up to 200 times your stake with the right combination. The key icon is the joker hat one. This is the Scatter in the Joker Pro game.

The Joker Pro slot is all about the Joker Pro Re-spins feature. You will open up this extra game when the joker hat Scatter appears on each of the three middle reels. Immediately reels 1 and 5 become wild reels and then there will be three Hot Spot positions that show up in the middle of reels 2, 3, and 4. If that isn’t enough then the Scatters which originally launched the feature will turn wild and they will remain on the reels, creating even better chances to win!

Keep your eye out for the Wild icon landing on the reels during the feature as this could provide you with another go at the Re-Spin feature. If you are able to get three of the wild icons in the Hot Spot zones you could win 1,000 times you initial wager!

One of the appealing things about the Joker Pro slot game is the RTP rating which is very much above the average at 96.9%. That is on the side of the player which is an attractive trait of the game.

The Joker Pro slot is a very simple game in terms of the theme and the way it is played, but despite that, it is very much a game to be tried and played for gamers of all kinds. There is a medium volatility to the slot with the feature being where the big rewards in terms of payouts come from. The graphics and images are clear and easy on the eye and the soundtrack will keep you entertained throughout what is an enjoyable playing experience. There really is a lot to like about the Joker Pro game.