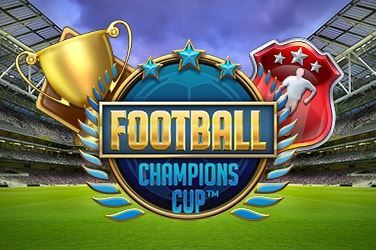 The Football: Champions Cup Slot Game, developed by Net Entertainment, is a sports-themed slot with a five-reel, three-row layout, and 20 paylines. The game is packed with excellent bonus features, and the high-quality design is compatible with all devices, including smartphones and tablets.

With a Return to Player (RTP) of 96.82%, the Football: Champions Cup Slot Game is considered a medium volatility slot.

The theme of the Football: Champions Cup Slot Game is pretty obvious – it’s all about football. The game was released shortly before the Euro 2016 matches, allowing you to choose which team you want to play with. The graphics are high-quality, with a football field sitting behind the transparent reels.

There are several attractive bonus features which you can enjoy in the Football: Champions Cup Slot Game, including the penalty shootout bonus. This can be activated by landing at least three bonus symbols in any position across the reels. The feature follows a ‘pick and click’ set-up, with two parts to each of the five rounds.

You’ll begin by selecting one of the four goal positions to try and score in. If you score a goal, your team’s score will go up by one point, awarding a cash prize in the process. You’ll then take on the goalkeeper’s role and select one of the four positions to try and save the incoming shot from the opposing team. If you manage to save it, you’ll be rewarded with a multiplier. If you let the goal in, the opposing team’s score will increase. This will continue for five rounds, or six if it’s a tie-breaker, and one team will be crowned the winner.

There’s also the chance to trigger the free spins feature by landing three or more cup scatter symbols in any position on the centre three reels.

There are multiple rounds to the free spins tournament, with each game providing six free spins. Wilds will land throughout the rounds, offering the chance for you or your opponent to earn points. There are cash prizes for ending in the third, second or first place worth 20x, 100x or 500x your stake, respectively.

The Football: Champions Cup Slot Game is an entertaining slot with plenty of features to keep up the game’s pace. There’s the potential to land some victorious wins through the free spins tournament feature, and the penalty shootout can lead to an impressive multiplier.