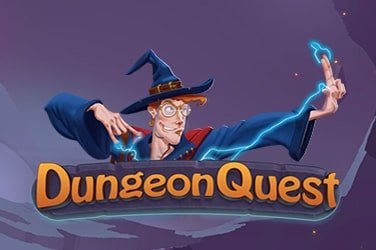 Dungeon Quest owes a lot of its style to role-playing games like Dungeons & Dragons, and we were delighted that developers NoLimit City decided to pay homage to the genre with a slots game.

Setting off on a harebrained adventure in search of gold and jewels is a bit like being a slots player, you have to be brave and clever to make sure you get out in one piece with your wallet bursting with treasure. But is this game worth risking it all, or should you stay at home? Let’s take a look in our Dungeon Quest review.

Quests in Dungeons & Dragons usually start out simple, and in this one you’re motivated purely by greed, heading off with the rest of your party into the mines to grab as many gems as you can. Fans of role-playing games will laugh at the clever theme which incorporates four of the classic characters from D&D into the slot, with a Barbarian, a Rogue, a Paladin and a Mage watching from the left of the screen behind the reels. To the right, the mouth of a scary-looking cave gapes, carved into the head of a dragon. It’s all very reminiscent of the art used in the game, though the symbols are seemingly unrelated, and consist of a variety of coloured gems.

Dungeon Quest uses a strange layout that looks like it should be a cascading reels slot, but it operates reels, rows and paylines like a normal slot instead. There are five reels, seven rows and 29 pay lines to play on, which means a lot of wins and a top prize of 450x to play for. When factored alongside the top bet of £/€/$100 per spin, that seems like a pretty good figure to start with, and the RTP of 96.27% confirms the game’s generosity. To make the most of the prizes available in this game it’s also necessary to do well in the bonus games, so it’s lucky that there are a few options to aim for!

Two of the bonus features in this game actually take place during the main game, while there is one separate round featuring free spins. The first bonus feature is the Gem Forge, which randomly causes up to four of the low-value symbols to transform into high-value gem symbols. A second feature is the Power Stone, which causes the ground to shake and a 2×2 area of symbols on the reels to transform into wilds, while nearby ore symbols will also become wild. Finally, landing three of the alchemy stone scatters will grant you four free spins, and during each spin one of the ore symbols will become wild and stick to the reels, potentially causing some big wins by the fourth spin.

The Dungeon Quest slot game features a fun theme and some interesting mechanics that make for decent payouts in the main game, though you’ll need to progress into the bonus games if you really want to make a lot of money. Luckily that’s easily done, and thanks to the generous random bonuses you get in the main game you’ll have plenty of chances to stuff your wallet.