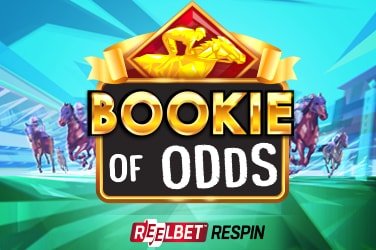 The Bookie of Odds game is powered by a collaboration between Triple Edge Studios and Microgaming and features an exciting horse racing theme. With 5 reels and 10 pay lines, players can choose to spin a minimum price of 10p and a maximum of $/€/£25 per spin across each device they use.

What the game involves

The game is presented around a racetrack and features A, K, Q J and 10 royals. There are also blue, purple and red jockeys racing on the reels. With horse racing games only tending to appeal to a niche audience, in some ways, the game lacks originality in terms of its set up and design, which shows a high level of similarity to those like Book of Oz, also powered by Microgaming. However, compared to other horse race-themed slots, players can expect to see fantastic, vivid graphics from Bookie of Odds, with many of the symbols being very well designed.

With a 96.31% Return to Player (RTP) the game is ideal for those who aren’t looking to bet big. With extremely high odds of having their money returned, Bookie of Odds may appeal to those who enjoy the satisfaction of winning frequently. However, the game is advertised as a high volatility slot machine, so when it does pay, it can pay a lot. The game can also have huge potential rewards if the player is brave enough to make a payout of 5000x the stake for a single round, allowing them the chance to hit the jackpot. This opportunity is mainly due to the game’s bonus features:

Bookie of odds comes set with several bonus features, starting with a Re-Spin. The player will find a re-spin button at the bottom of each reel, allowing the player another chance to win at the end of each turn. The player will have to pay for this re-spin, and they can find the cost on the re-spin button itself. Players are unable to use the re-spin feature while also using the next bonus feature, Free Spins.

The Free Spins feature can be re-triggered and works by the player attempting to reveal 3, 4 or 5 of the Gold Book symbols. If this is managed, they are then awarded 10, 12 or 25 free spins depending on the number they managed to reveal.

The final bonus features are expanding symbols, which are awarded at random at the start of the Free Spins feature. While this only happens if a win can be made, if the symbol is revealed, it will then expand to fill whatever reel it lands on.

For people who are big fans of horse racing themed casino games and enjoy the potential of a high pay-outs, Bookie of Odds can be a good choice. It benefits from a simplicity of design, not feeling the need to overcomplicate what should be a fairly easy casino experience.