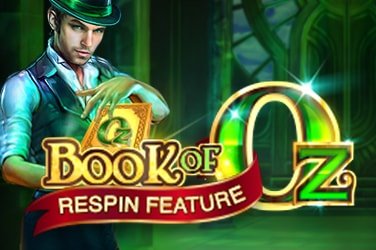 Historically, Microgaming has been one of the most successful online slot developers that the industry has ever seen, with the Malta-based company churning out several classics such as Mega Moolah. In recent years, the company has extended a helping hand to some brand-new developer studios, with Triple Edge Studios being one of the most successful.

The great thing about this dynamic is that providers such as Triple Edge Studios get to put a huge amount of zeal to creating the first slots in their catalogue, and Microgaming gets to distribute these games across their vast network. Book Of Oz is one of the first collaborations between Microgaming and Triple Edge Studios, and if this game is anything to go by, this is a link-up we are going to see again and again. Read on for a Book Of Oz slot review.

As you might have guessed from the title, Book Of Oz takes the wonderful world of The Wizard Of Oz as a major theme, however, the action is more preoccupied with the mythical wizard, rather than Dorothy and co. As such, this slot’s aesthetic is steeped in deep emerald greens, with Triple Edge Studios and Microgaming showing their prowess with some seriously impressive HD graphics.

The slot utilises the classic 5-reel grid configuration and also has 10 pay lines, something that might disappoint some slot gamblers used to more pay lines, however, it proves to be more than enough to make some big wins on. Line bets start at just 0.01 and go all the way up to 2.00, which means that the maximum bet that gamblers can place on one spin is 100.00. One thing is certain, high rollers are going to love Book Of Oz…

With an RTP of 96.5%, it makes perfect sense to expect some pretty lucrative bonus features from Book Of Oz, and the good news is that Triple Edge Studios and Microgaming have offered exactly that. The book that this slot derives its title from acts as both the wild and scatter icon here, being able to swap with other icons, as well as award up to 25 free spins.

And there’s more too because, at the start of the free spins round, players are invited to choose one icon that will expand to cover the entire reel when it becomes part of a winning combination. Another cool feature during Book Of Oz is the ability to re-spin a specific reel after each base mode turn. This costs a little extra, of course, but it can make all the difference if used strategically.

About the developer: Triple Edge Studios and Microgaming

Microgaming is responsible for some fantastic things such as their Progressive Jackpot Network, and the titans of the slot industry have chosen to work with smaller companies such as Triple Edge Studios in order to help them reach their maximum potential.

This is a cracking online slot game, and the re-spins feature makes it very easy for gamblers to strategically win as much money as possible.