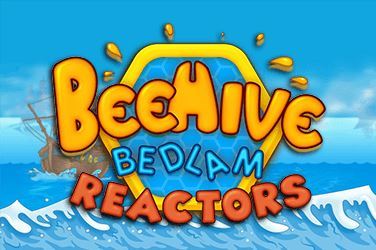 There’s a lot of buzz surrounding this slot, which we think will prove to ‘bee’ one of the most popular games of the year! That’s probably enough bee puns for now, but it’s hard to resist when you’re playing Beehive Bedlam, where helping the hive produce as much of the golden sticky stuff as possible is your ticket to riches.

This slot makes good use of a number of familiar features and snazzy design to create a top-quality package overall, but will you be the Queen Bee or will you get stung? Let’s take a look in our Beehive Bedlam review.

The Beehive Bedlam slot game utilizes a cutesy, cartoonish design to bring the hive to life, with a pleasant pastoral scene of green grass, blue skies and pleasant countryside behind the reels. The bees themselves are located within a traditional wooden hive, which accounts for the unusual 7×7 setup of the reels, while each symbol takes the form of a honeycomb in which the different images fall. Different coloured flowers, cutesy honey bees and a harried-looking beekeeper make up the symbols, as well as a free fall symbol that acts as a scatter. While the graphics aren’t exactly stand-out, the whole package looks good enough to sell the setting to casual players.

This game makes use of the cascading reels mechanic so that each successful combination removes the winning symbols and allows new ones to fall from above to replace them. Alongside this, you can also make cluster wins, so that you win by landing symbols in groups rather than just in a line. There’s no limit to the number you can win in this way, which combined with the cascading reels mechanic means that there is a very high potential for big cascading wins. This is all very nice but not particularly engaging, so it’s a good thing there are bonus rounds to play with as well because with an RTP of 94.37% you’ll be counting on them to win big!

The first and biggest bonus feature involves the poor beekeeper and his jar of honey and is activated by landing a combination that incorporates the beekeeper symbol. Each time you do this, the jar of honey gets filled up slightly more until it is full. Filling the jar activates a video game-style mini-game in which you have to help a bee avoid obstacles and collect coins for cash prizes. There are 20 levels of this element, and you even get multipliers added to your total periodically, so it’s a great idea to advance as far as you can! This game also boasts free spins that are activated by landing the free fall tokens in winning combinations, and you can make a maximum of 15 in one go, while two new high-value symbols are added to the reels for the spins. And if that wasn’t enough, there’s a chance of winning a progressive jackpot if the bee that flies across the reels on the last spin of your bonuses manages to spell out the word Jackpot at the top. Phew!

Beehive Bedlam is a gentle, fun slot that makes use of a novel combination of mechanics to deliver a pretty unique gaming experience that’s fun and rewarding in equal measure. You won’t win huge prizes in one go because this game is all about the slow build-up to larger cash prizes, but the process is fun enough that you won’t mind.