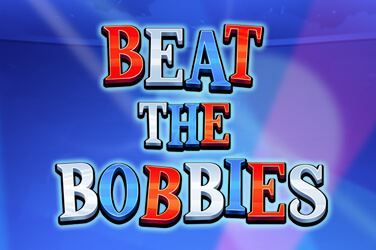 Brought to you by Eyecon Games, the Beat the Bobbies Slot Game is a British themed slot, set outside Buckingham Palace. The design is mobile-optimised, so you can play on whichever device suits you.

With a Return to Player (RTP) of 95.20%, the Beat the Bobbies Slot Game is considered a medium variance slot. It’s a 243 payline slot, which sets it apart from most Eyecon Games slots which usually offer just 25 winning ways. However, instead of needing to match pre-specified payline sequences, symbols adjacent to one another are enough to result in a win.

The theming consists of a stereotypical British landscape, with luscious green grass in view at the bottom of the screen, and the upper part showing what appears to be Buckingham Palace. The red, white, and blue colour scheme which can be found across the labelling also contributes to the British theme, as do the symbols, which also carry the same British stereotype.

Symbols include ruby rings, gemstones and jewelled crowns, alongside police officers wilds, and Penny, the cat burglar, scatter. You’ll also find an old lady, guardsman, postman, older man, bulldog and tiara, plus a couple of others. The characters are all colourful, and the cartoon-like aesthetic works well with the background.

The Beat the Bobbies Slot Game’s minimum bet sits at a relatively low $/€/£00.25, with the highest possible wager set at $/€/50.00. There’s an autoplay function available if you wish to use it.

The wild policeman symbol can only appear on the centre three reels, substituting for all but the scatter.

Land three, four, or five of the scatter symbol – Penny the cat burglar – on a single spin to be awarded a payout worth five, ten, or 50 times your stake, respectively. Landing these scatter symbols will also activate the free spins bonus feature, which presents a series of free spin and multiplier combinations. Free spins range from eight to 20, while multiplier values range from two to five times.

The Beat the Bobbies Slot Game is a simplistic video slot, though it is quite volatile and can result in drawn-out dry spells in terms of winnings. However, the bonus round offers a great chance to land some impressive wins, mainly if you land further scatters and continue retriggering free spins until you hit the maximum number allowed. The multipliers are also a nice touch here and can help a big win. The design is stereotypical but fun, with decent, well-polished graphics and smooth animations.

If you can Beat the Bobbies, why not beat these slots: Unicorn Bliss Jackpot, Kiss Me Clover Jackpot and Piggy Payout Jackpot.